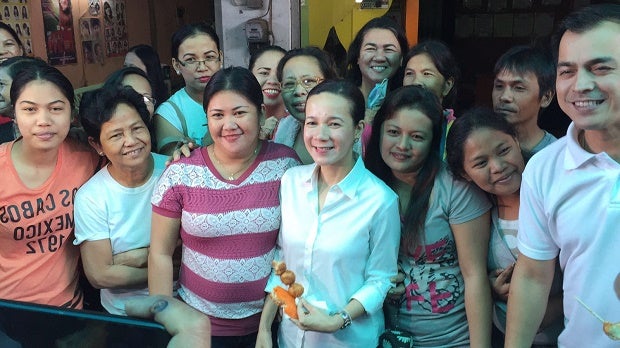 LAOAG CITY, Ilocos Norte—Presidential aspirant Senator Grace Poe arrived here early Thursday morning for a series of activities, including a tour at a wet market, a motorcade and consultations with students of the Mariano Marcos State University.

The said province is the hometown and bailiwick of Senator Ferdinand “Bongbong” Marcos Jr., who is running against Poe’s vice presidential bet, Senator Francis “Chiz” Escudero.

The lady senator will start her visit in the province with a tour at the Batac market at 7:30 a.m, followed by a motorcade at 8:30 a.m. with a short stop at Batac City Hall to meet and greet local officials.

From the City Hall, Poe will proceed to the Mariano Marcos State University Covered Court to hold consultation meetings with its students at 9:30 a.m.

Poe is scheduled to grant media interviews at 10:30 a.m before she flies to Vigan, Ilocos Sur to meet with local officials there.

On Friday, Poe and Escudero are scheduled to visit Pangasinan, their third provincial sortie since the official campaign period began last Tuesday.

The tandem, along with some of their senatorial bets, were in Cebu Wednesday, just a day after the official 90-day campaign period officially kicked off Tuesday.

Poe’s team held its kick off rally at the historic Plaza Miranda in Quiapo, Manila. RAM