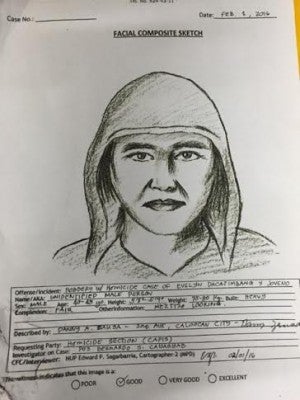 The Manila Police District has released this sketch of the gunman who shot, killed and robbed private firm finance officer Evelyn Dacatimbang in Quiapo, on Feb. 1, 2016. (Photo courtesy of the MPD)

MANILA, Philippines — Policemen have come out with a sketch of the robber who killed a finance officer in Quiapo, Manila, last week.

A description accompanying the sketch, a copy of which was obtained by the Philippine Daily Inquirer, said the gunman was between 40 and 43 years old.

Witnesses said he had fair complexion and was mestizo looking, had heavy built, and weighed about 70 to 80 kilos. The witnesses added that the robber stood about 5’8 in height.

Dacatimbang was walking to a bank to deposit the store’s weekend earning last February 1 when a lone robber shot her head and took her bag containing P100,000.

Guiagui considered the surfacing of the three witnesses  a major breakthrough because prior to this, none of the bystanders could describe the gunman. Most of the witnesses interviewed said they couldn’t describe the face because the robber wore a bull cap.

The robber was one of the five persons the police have been tracking. Another “person of interest” was Dacatimbang’s co-worker.

“We are still looking at an inside job here,” Guiagui said.  SFM