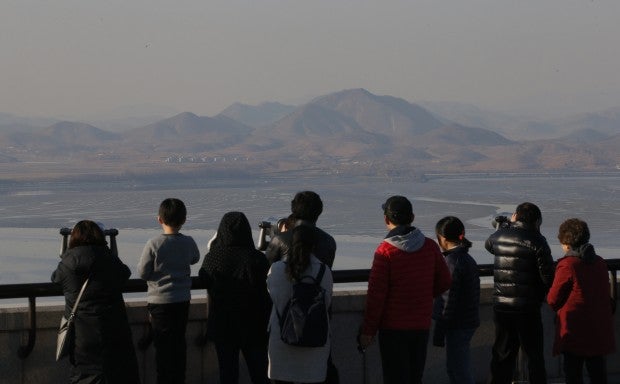 Visitors use binoculars to see the North Korean territory from the unification observatory in Paju, South Korea, Wednesday, Feb. 10. South Korea said Wednesday that it would suspend operations at a joint industrial park with North Korea in response to the North’s recent rocket launch, the first time in the park’s decade of operation that Seoul has halted work there. AP

SEOUL—South Korea said Wednesday that it will shut down operations at a joint industrial park with North Korea in response to the North’s recent rocket launch, accusing the North of using hard currency from the park to develop its nuclear and missile programs.

The move to end operations at the industrial complex in the North Korean border city of Kaesong, the last major cooperation project between the rival countries, comes after North Korea on Sunday launched a long-range rocket considered by other nations to be a banned missile technology test.

South Korean Unification Minister Hong Yong-pyo said at a news conference that the suspension of operations at the park in the North Korean border city of Kaesong would stop the North from using hard currency earned there to develop nuclear and missile technology.

The park, which started producing goods in 2004, has provided 616 billion won ($560 million) of cash to impoverished North Korea, Hong said.

“It appears that such funds have not been used to pave the way to peace as the international community had hoped, but rather to upgrade its nuclear weapons and long-range missiles,” he said at the televised briefing.

The unification ministry said in a statement that the government had “decided to completely shut down” the park.

South Korea’s government will provide financial compensation to companies that operate at Kaesong, the finance ministry said in a statement.

There was no immediate reaction to the move from North Korea.

South Korean businesses that operate factories at the park reacted with a mixture of disappointment and anger. Lee Eun Haeng, chairman of Ilsung Leports, which produces fashion goods at the park, said the companies had become “victims” of a political situation.

“For the companies and for their suppliers to survive, the government should give enough compensation,” Lee said by phone. “There are hundreds of thousands of South Korean workers and families who rely on the Kaesong park for their living. They have become jobless overnight.”

Nonetheless, he said, he had no choice but to accept the government’s measures because they were for the sake of “national security.”

Combining South Korean initiative, capital and technology with the North’s cheap labor, the industrial park has been seen as a test case for reunification between the Koreas. Last year, 124 South Korean companies hired 54,000 North Korean workers to produce socks, wristwatches and other goods.

South Korea’s government and companies invested more than 1 trillion won ($852 million) to pave roads and erect buildings in the park zone, which lies in a guarded, gated complex on the outskirts of Kaesong, North Korea’s third-largest city.

South Korean companies in Kaesong survived during past periods of tensions that led to the suspension of other inter-Korean projects. A major interruption to the park’s operation came in 2013, when North Korea pulled out its workers in protest of South Korea’s joint military drills with the United States.

North Korea launched a long-range rocket Sunday carrying what it said was an Earth observation satellite into space. The launch, which came about a month after the country’s fourth nuclear test, was quickly condemned by world leaders as a potential threat to regional and global security.

Read Next
Man selling fake dollars ‘worth P20M’ arrested in Cagayan de Oro – NBI
EDITORS' PICK
Unleash the photographer in you this World Photography Day with vivo smartphones
What to watch out for when selecting a video surveillance solution
Look Through: The fate of impounded stray dogs
House energy committee chair Arroyo bats for cheap electricity
Palace warns sugar hoarders after raid on Pampanga warehouse
Metro Manila’s COVID-19 cases on downward trend, but surge not over — OCTA
MOST READ
LOOK: Miel Pangilinan dazzles in glittery pre-debut shoot
Remains of two children found in suitcases auctioned in New Zealand
Palace warns sugar hoarders after raid on Pampanga warehouse
Alice Dixson to critics of her yellow gown at GMA Gala: ‘’Wag masyadong judgmental’
Don't miss out on the latest news and information.