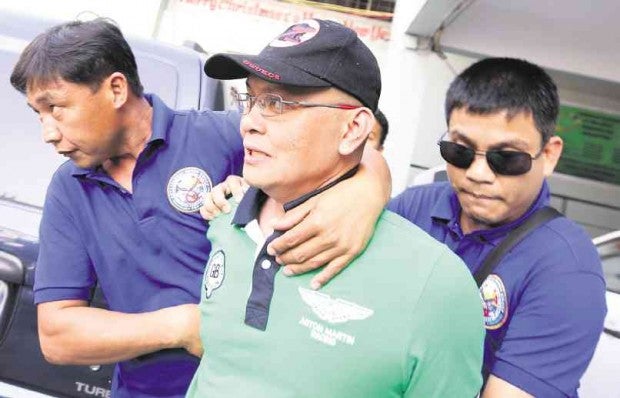 MANILA — The Philippine National Police (PNP) opposed, on Wednesday, the plea of detained former anti-drug agent, Lt. Col. Ferdinand Marcelino, to be moved to the National Bureau of Investigation (NBI) or the Philippine Navy, his home unit, for alleged threats to his life.

In a letter to the Department of Justice, PNP’s Anti-Illegal Drugs Group said allowing Marcelino’s transfer would set “a bad precedent and open the floodgate to similar requests” from soldiers now also detained for various offenses.

“To avoid negative perception that respondent Lt. Col. Marcelino enjoys special treatment while in detention, it is best to detain him pending preliminary investigation at the BJMP (Bureau of Jail Management and Penology) Facility,” read the letter signed by Senior Supt. Manolo Ozaeta.

Marcelino and drug suspect Yan Yi Shou, both arrested on Jan. 21 in a drug raid in Manila, are currently being held at the BJMP annex in Camp Bagong Diwa, Taguig City, under the watch of the PNP and the Philippine Drug Enforcement Agency.

Marcelino had requested that he be transferred to the NBI or the Navy because of security concerns. The Navy also separately sought custody of Marcelino, being in active service.

But according to Senior Deputy State Prosecutor Theodore Villanueva, the DOJ has no power over the place of detention, as this rests in arresting agencies. The DOJ’s mandate is to determine the presence of probable cause: either order the respondents’ trial if there is, or release them in case there is none.

Marcelino and Yan faced the third preliminary hearing at the DOJ Wednesday morning under heavy guard.

The two are facing non-bailable drug charges — manufacture, conspiracy to manufacture and possession — after they were busted at a makeshift drug laboratory with 64 kilos of methamphetamine hydrochloride (shabu) worth P320 million.  SFM