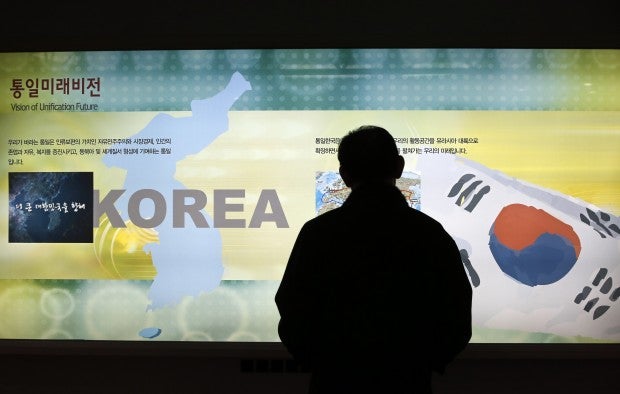 A visitor looks at a map of the Korean peninsula at the exhibition hall of the unification observatory in Paju, South Korea, Wednesday, Feb. 10. South Korea says it will suspend the operations at a joint industrial park with North Korea in response to the North’s recent rocket launch. AP

North Korea’s launch of a long-range rocket has drawn sharp condemnations and threats of new sanctions. World leaders say Sunday’s launch violated a UN ban on Pyongyang’s use of ballistic missile technology. North Korea says the launch of a new Earth observation satellite, the Kwangmyongsong 4, or Shining Star 4, is part of a peaceful space program.

A look at the latest developments on Wednesday:

South Korea said it was suspending operations at a joint industrial park with North Korea, the first time in the park’s decade of operation that Seoul has halted work.

South Korean Unification Minister Hong Yong-pyo said the suspension at the industrial complex in the North Korean border city of Kaesong would stop the North from using hard currency earned there to develop nuclear and missile technology.

There was no immediate reaction from North Korea.

The park is the last major cooperation project between the rivals. Combining South Korean initiative, capital and technology with the North’s cheap labor, it has been seen as a test case for reunification. Last year, 124 South Korean companies hired 54,000 North Korean workers to produce socks, wristwatches and other goods.

He said the sanctions will be approved by the Cabinet later and will require legislative changes in parliament.

The measures will include expanded restrictions on travel between the two countries and a complete ban on visits by North Korean ships to Japanese ports.

US senators are expected to vote on more stringent sanctions against North Korea, targeting Pyongyang’s ability to access the money it needs for developing miniaturized nuclear warheads and the long-range missiles to deliver them.

Director of National Intelligence James R. Clapper said in an assessment to Congress that North Korea has expanded a uranium enrichment facility and restarted a plutonium reactor that could start recovering material for nuclear weapons in weeks or months.

Both findings will deepen concern that North Korea is not only making technical advances in its nuclear weapons program, but is working to expand what is thought to be a small nuclear arsenal. US-based experts have estimated that North Korea may have about 10 bombs, but that could grow to between 20 and 100 by 2020.

Clapper said that Pyongyang has not flight-tested a long-range, nuclear-armed missile but is committed to its development.