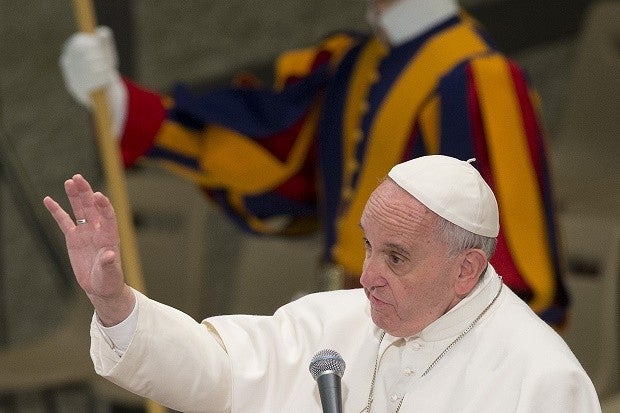 Pope Francis speaks during an audience with nuns and priests, in the Pope Paul VI hall at the Vatican, Monday, Feb. 1, 2016. AP

VATICAN CITY — A specially-recruited group of priests received last-minute instructions from Pope Francis Tuesday before fanning out through the world to show a more merciful face of the Catholic Church to sinners.

About 700 priests from around the globe, many of them using headphones for translation, gathered in an ornate hall of the Apostolic Palace at the Vatican to hear Francis stress the welcoming image he wants faithful to have of their church and how priests should act when hearing confessions. The pope lamented that many people abandon confession because priests scold them or pry for embarrassing details.

Confessors “aren’t called to judge, with a sense of superiority” but instead welcome penitents with “open arms,” Francis said.

“It’s not with the cudgel of judgment that we will succeed in bringing the lost sheep back to the fold,” he said.

This special corps of around 1,000 confessors is known as the Missionaries of Mercy. Reflecting the far reach of the Catholic church in ministering to its 1.2 billion flock, they will be traveling this year to countries including United Arab Emirates, Egypt, China, Burundi and Israel. One priest will head to the far Canadian north; another will use a camper to reach Catholics living in remote parts of the Australian countryside.

“If you’re going to the Arctic, bundle up!” the pope quipped.

Francis gave his pep talk a day before the priests officially start their mission on Ash Wednesday, the start of the annual church period stressing penitence before Easter.

They play important roles in the Holy Year of Mercy, an initiative of Francis to encourage a more forgiving mentality in the Catholic church, often seen as harsh and judgmental toward those who stray from its teachings. Candidates had to be “inspiring preachers of mercy” and “especially attentive to the difficult situations of each person.”

The Missionaries of Mercy will be able to absolve extremely grave and relatively uncommon sins that normally must be dealt with by bishops or officials at the Vatican. Among those sins are profaning a consecrated host, ordaining a bishop without papal permission and violating confessional secrecy.

Abortion is also one of those grave sins that normally must be handled by a local bishop or a Vatican official, but during the Holy Year Francis is allowing all rank-and-file priests to grant such absolution.

The pope said he realized some women felt they had no choice but to make the “agonizing and painful decision” to have an abortion.

In Catholic teaching, abortion triggers automatic excommunication when the person is aware of the penalty and commits the sin nevertheless.