Obama calls for $1.8B to fight Zika 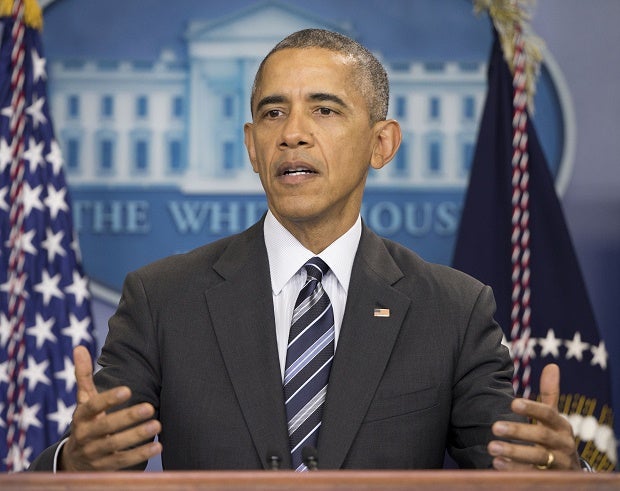 In this Feb. 5, 2016 file photo, President Barack Obama speaks in the Brady Press Briefing Room of the White House in Washington. President Barack Obama is asking Congress for more than $1.8 billion in emergency funding to help fight the Zika virus. In an announcement Monday, the White House said the money would be used to expand mosquito control programs, speed development of a vaccine, develop diagnostic tests and improve support for low-income pregnant women. AP File Photo

WASHINGTON, United States—President Barack Obama on Monday asked for more than $1.8 billion in emergency funds to tackle the fast-spreading Zika virus in the United States and beyond.

The mosquito-borne illness has surged through Latin America, prompting fears that clement spring weather could bring a spate of cases north of the Rio Grande.

Zika is not deadly but in Latin America has been linked to a rapid rise in the number of children born with microcephaly—abnormally small heads and brains.

There is currently no cure or vaccine for the virus which, in most people, causes mild symptoms.

While Obama called for more funds, he also urged calm.

“The good news is this is not like Ebola, people don’t die of Zika—a lot of people get it and don’t even know that they have it,” he told television channel CBS.

“There appears to be some significant risk for pregnant women or women who are thinking about getting pregnant.”

“We don’t know exactly what the relations there are but there is enough correlation that we have to take this very seriously.”

The World Health Organization has declared a global medical emergency to combat Zika and individual countries and regions are beginning to mobilize.

The head of the US National Institutes of Health, Anthony Fauci, said the prospects for a vaccine are good and phase one trials could begin “sometime in the summer.”

“(We are) unlikely to have a vaccine that’s widely available for a few years but we certainly can get the initial steps.”

In the interim, some countries have taken the extraordinary step of urging women to delay having children.

In Europe, a medicines watchdog has set up a task team to help develop drugs and vaccines.

According to the Pan-American Health Organization, 26 countries have confirmed cases, spanning 7,000 kilometers (4,400 miles) from Mexico to Paraguay.

The hardest hit country is Brazil, which hosts the Summer Olympics starting in August.

Fear of catching the virus has become a national obsession, dabbing this year’s carnival extravaganza with a large dollop of Mosquito repellent.

Pharmacies report they are starting to sell out of some repellents.

In Colombia, more than 22,600 cases of the Zika virus have been confirmed.

There, the virus has been linked to Guillain-Barre syndrome, a neurological disease that can cause paralysis in humans.

The US Centers for Disease Control has so far found 50 confirmed cases of Zika among travelers returning to the United States.

In at least one instance, in Dallas, the disease may have been transmitted sexually.

But the Aedes aegypti mosquito that carries the virus is endemic across the southern and eastern United States.

“As spring and summer approach, bringing with them larger and more active mosquito populations, we must be fully prepared to mitigate and quickly address local transmission within the continental US, particularly in the southern United States,” the White House said.

Puerto Rico and other US territories in warmer areas are especially vulnerable.