May 9 polls may be PH wildest and closest race 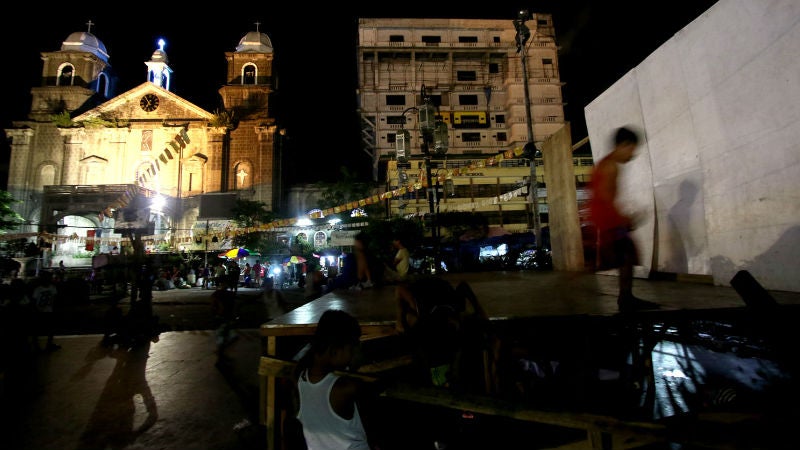 The May 9 general elections will likely end up as the wildest, down-to-the-wire political contest this politics-obsessed country has ever seen. And we’re just talking about the presidency.

There are no runaway favorites in this year’s mad scramble for Malacañang. The most recent survey shows four presidential candidates have a realistic chance of winning while another is a sentimental favorite who’s running for the third time but who should’ve won at her first crack.

Pundits interviewed by the Inquirer consider this a make-or-break election for Sen. Grace Poe, Vice President Jejomar Binay, Liberal Party (LP) standard-bearer Mar Roxas, Davao City Mayor Rodrigo Duterte, and Sen. Miriam Defensor-Santiago. Winning is everything and the only thing in politics, and defeat could probably mean curtains down for his or her political career.

So what’s at stake for losers in these elections?

This will probably be the last bus ride to Malacañang for three senior citizens—Binay, 73, Duterte, 70, and Santiago, 70. But Edmund S. Tayao of the University of Santo Tomas’ Department of Political Science said that “win now” was also the mantra of Roxas who, albeit still middle-aged at 58 years old, could not afford to lose a national election back-to-back, especially coming off from the bitter defeat in what was supposed to be a cakewalk to the vice presidency in 2010.

“It will surely be a big blow not only to his political career but also to his morale. But more than that, losing also means that the proverbial endorsement power of an Aquino may now be diluted,” Tayao said.

Akbayan Rep. Walden Bello, who is seeking a Senate seat, said that among the five candidates, Roxas and Binay had the most to lose.

Bello said that a Roxas defeat would not only have personal consequences, it would also mean payback lawsuits against LP members for their purported indiscretions in the last six years, particularly Budget Secretary Butch Abad and President Aquino.

“If Mar loses, expect the prosecution of Butch Abad for DAP (Disbursement Acceleration Program) and the President for DAP and Mamasapano. Abad will probably end up in jail but it’s unlikely that the Office of the Ombudsman and the Sandiganbayan will convict Aquino. Abad will most likely fall on his sword for his boss on DAP,” Bello said.

For Binay, Bello said winning Malacañang was like getting a “get out of jail free card” because he was expected to be imprisoned for his alleged deals while he was mayor of Makati City.

Tayao said Duterte and Poe had the least to lose in these elections.

“Mayor Duterte has declared a number of times he would retire after this, win or lose. His daughter who is equally revered in Davao, Sara Duterte, may very well sustain their hold on the city. On the other hand, losing may be taken to mean a local figure will have to start with a lower position, say at the Senate before running for President for one to get a chance,” Tayao said.

Poe has the least at stake in the race because she still has three years remaining in her senatorial term, unless she loses her citizenship case in the Supreme Court.

These elections, however, will not be for the faint-hearted.

Ako Bicol Rep. Rodel Batocabe said that these would be the most unpredictable elections ever not only because voter preference was so dispersed, but because of the variables that had yet to unfold in the next three months before Election Day.

Batocabe cited the Supreme Court’s decision on whether to allow Poe to run; the health issues hounding some candidates; the final shift in political alliances; and the final candidates of big-money financiers.

The LP political affairs chief, Caloocan Rep. Edgar Erice, said Poe’s disqualification case due to questions on her citizenship and residency issues would be a “game-changer” in the elections.

With so much unpredictability, Batocabe said this year’s elections were bound to be the most expensive ever as each presidential candidate would go all out in their ad spending on television, radio, print and social media because most of them believe they have a chance to win it all. 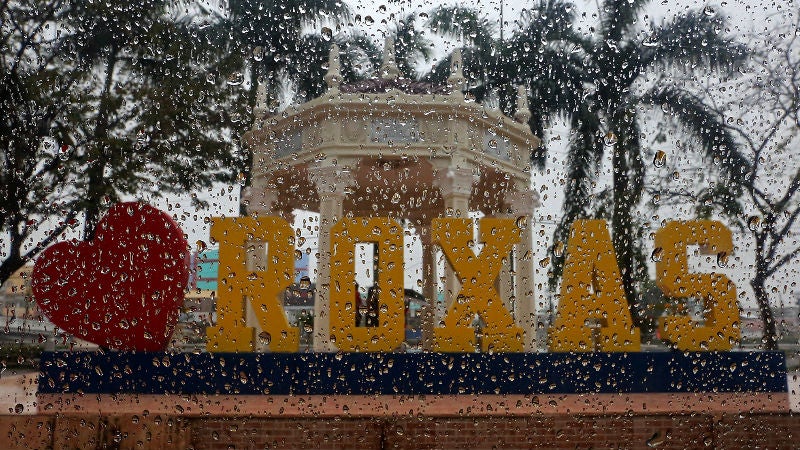 MAR PROCLAMATION IN ROXAS Arainy Roxas City in Capiz province awaits Liberal Party standard-bearer Manuel “Mar” Roxas II who will kick off his campaign today. The city is named after his grandfather and namesake, the late President Manuel A. Roxas. RAFFY LERMA

Batocabe said the Commission on Elections (Comelec) had all but guaranteed this spending bonanza when it allowed candidates to use up to 120 minutes of TV airtime and 180 minutes of radio ads for each station when previously these were computed on an aggregate basis for all stations.

Adding more drama in this year’s campaign is the lack of solid political alliances where a presidential candidate has one running mate and a solid ticket of senators, he said.

Another factor in the hurly-burly elections is the continued ascent of the Marcos family back to power 30 years after they were booted out of Malacañang. Sen. Ferdinand “Bongbong” Marcos Jr. has made the vice presidential race as interesting as the presidential race. President Aquino has taken note and this could provide more impetus to personally campaign for the LP people.

The “daang matuwid” coalition spokesperson, Marikina Rep. Romero Quimbo, is sure of one thing: If all five presidential candidates finish the race, the winner will not be the choice of the majority of the voters.

“Judging from all the survey numbers coming out, it’s absolutely anybody’s ball game. And certainly, it’s a race down to the wire. Everyone agrees that whoever wins this, will be a minority President. At the onset, he will be immediately faced with a mandate challenge. A minority President will only succeed if he’s a unifier—someone who will be acceptable to the supporters of other presidential candidates,” Quimbo said.

“Only Mar fits that bill—no record of corruption, consensus builder, a great courtier of opponents. It would be a shame to throw away all the country’s accomplishments in the last six years if we end up voting for a minority President who’s polarizing and divisive,” he added.

Valenzuela Mayor Rex Gatchalian said that Poe, should she win, would be willing to work with everybody in moving her programs forward.

“Naturally, because of her independent status she will not have incumbent party mates to boast off. Despite this, she will reach across the aisle working with all organized political parties to make her programs for the people turn into reality. Running as an independent, Senator Poe enjoys the advantage of making her government inclusive—being able to cross party lines to get things done,” said Gatchalian, Poe’s spokesperson.

“It’s ‘tayo rather than kami’ or breaking the traditional mold of only being able to work within the confines of your political party. Senator Poe will be able to transcend the restrictive traditional concepts of governance through political parties,” Gatchalian said.

But Bello said that any President would find a way to make compromises, just like in the past.

“I think there has never been a minority President in this country since whoever is elected has been able to use the tremendous powers of the President to immediately construct an overweening majority. This is a great flaw here since the traditional way of constructing majorities on personal and political grounds will preclude the kind of coalitions based on common stands that are so necessary today. This personalist-political compromises are what derailed ‘daang matuwid,’” Bello said.

Whether majority or minority President, Bello said the country’s new leader would have to tackle head on the next administration’s biggest problems—a spurned Muslim Mindanao still licking its wounds from the nonpassage of the much-hyped proposed Bangsamoro Basic Law (BBL) and a discontented population increasingly left out of the spoils of the country’s rising economy.

Bello said the next President would have to act quickly on ensuring inclusive growth or risk being hobbled by “conservative economic management that will hesitate to undertake more fundamental reforms like legislating security of tenure for workers and more aggressive agrarian reform and is stuck with the highly inadequate CCT (conditional cash transfer).”

But Bello is not keeping up his hopes that this year’s elections would end up differently from previous versions.

“I am afraid none of the presidential candidates realize the enormity of the problems we face demand solutions outside the coordinates of traditional politics and the winner will most probably reign in the same old way until it’s too late. The failure of Aquino is not only the failure of a politician who was out of his depth but also the failure of the politics he was socialized into,” he said.

The United Nationalist Alliance president, Navotas Rep. Toby Tiangco, said the Vice President was clear on what was at stake in the elections: “It’s not about Binay or any of the other candidates, it’s about eradicating poverty.”

Tiangco brushed aside fears that Binay would be a vengeful leader and hound the administration officials who persecuted him. “Binay still considers P-Noy a friend and the friendship should not be affected by politics. P-Noy is assured to be accorded what is due him as a former President,” Tiangco said.

Tiangco said a Binay presidency would ensure the independence of the Office of the Ombudsman and the Sandiganbayan and that these entities would not be used against political opponents or to protect allies.