Campaigners to tell voters: Thank Aquino for projects but no need to vote for Roxas of LP
By: Ryan D. Rosauro - @inquirerdotnet
Inquirer Mindanao / 06:38 PM February 08, 2016 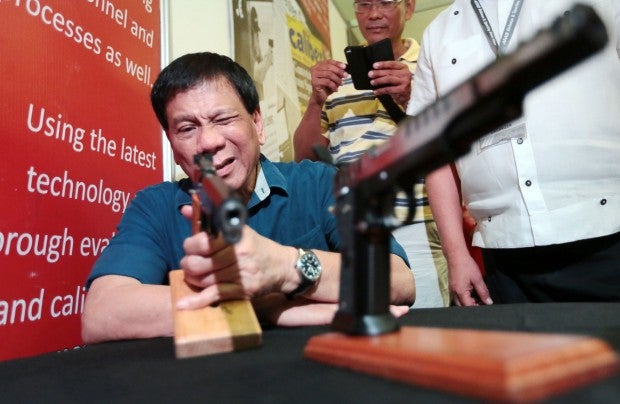 OZAMIZ CITY, Philippines – Campaigners for presidential candidate and Davao City Mayor Rodrigo Duterte in Western Mindanao would like to send a strong message to voters that they need not pick Mar Roxas of the Liberal Party even if they are grateful for the benefits brought by President Aquino’s government to their localities.

“People can be grateful to President Aquino, if there is basis to be, but not necessarily identify with his own choice of successor. These are two different matters altogether,” said Butch Baz, Western Mindanao coordinator of the Duterte Diehard Supporters (DDS), a campaign network for the feisty Duterte.

“In fact, surmounting the challenges facing the region such as corruption and criminality will require the leadership qualities of Mayor Duterte. So we will convince voters in the region to give their gratitude to PNoy but also courteously apologize to him for not abiding by his endorsement of a successor,” Baz added.

“This is quite tricky, but we are confident the ordinary folks will be able to discern the matter as we proceed with the campaign in the next three months. That will open a space for Mayor Duterte,” he explained.

“Come May 9, we hope to see that political apology to President Aquino reflected in votes for Duterte,” said Nestor Montemor, DDS’ point-man in Misamis Occidental.

Western Mindanao is thought to be ‘yellow territory.’

During the 2010 presidential polls, the ‘yellow fever’ downed the mighty political dynasty overseen by convicted child rapist and former Zamboanga del Norte Rep. Romeo Jalosjos. In that election, the
Jalosjos brood lost grip on local power in Zamboanga Sibugay and Zamboanga del Norte (except Dapitan City and the congressional post in the first district), and failed in their bid for expansion in Zamboanga del Sur.

Among others, government’s anti-poverty initiatives provide a solid foothold for Aquino’s influence and popularity in the region.

In 2015, Zamboanga del Sur and Zamboanga del Norte are among the top 10 provinces with the most number of beneficiaries of government’s conditional cash transfer program, both accounting for more than 250,000 households.

Thousands of Duterte supporters will open the campaign in Misamis Occidental on Tuesday with a morning motorcade.

Most politicians in Misamis Occidental have earlier cast their lot behind President Aquino’s chosen successor, grateful for some P5 billion worth of development projects that the national government invested in the province.

A “status quo” agreement among the coalition of the Liberal Party (LP), Nacionalista Party (NP) and National Unity Party (NUP) in the province’s second district has led to many uncontested local posts,
freeing up most politicians with the burden of having to win seats.

This is thought to boost their campaigning for Roxas.

In the first district, although most local posts are contested, the bets have declared support for Roxas.

“Continuity of development bounty will also come with a Duterte presidency, maybe even greater because mayor Duterte knows the needs of Mindanao far better than any presidential hopeful,” said Montemor.  SFM