No more walking for Albay kids 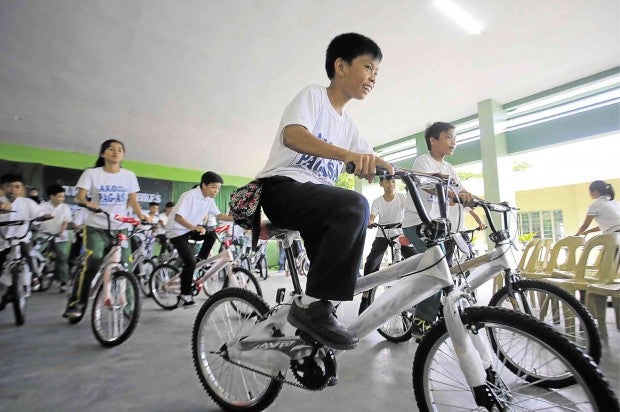 BIKE TO SCHOOL Students in Albay try out the bikes donated to them so they can get to school without the long hike from their homes. MARK ALVIC ESPLANA / INQUIRER SOUTHERN LUZON

LEGAZPI CITY, Philippines—Call it a late Christmas present or an early gift for Valentine’s Day.

Poor students from Albay, however, described the brand-new BMX bikes a most welcome and timely intervention that could possibly change their lives.

“Coming to school and going home will no longer be a burden for me,” said Rovelyn Silva, 15, a Grade 10 student from Barangay Bonga here, of the bikes donated by sponsors of the “Bike Mo, Pag-asa Ko (Your bike, my hope)” project.

Silva is one of the students forced to walk at least an hour to school because public utility jeepneys hardly ply the route to their remote village at the foot of Mayon Volcano.

The students’ plight and their determination to finish school despite their difficulty was featured in the Inquirer in December, along with their collective wish for bicycles as a Christmas gift.

Moved by the story, sponsors pitched in to donate more than 200 BMX bikes to Pag-asa National High School, according to its principal, Jeremy Cruz, who said the donated bikes would be added to the initial six bikes used in the project.

Under the project, the bikes will be entrusted to the students until they finish high school, after which they will be asked to return the bikes to the school so the next batch of students can use them.

“Students [who were always late or absent] have no more excuse not to attend classes regularly,” Cruz said, adding that the bikes can help students finish their studies.

The bikes will discourage students from dropping out of school, agreed Ramon Fiel Abcede, the Department of Education’s regional director for Bicol. Abcede promised to support the project even as he urged local governments and other groups to donate bikes to public schools in their community.

For Grade 7 student Jay Agarin, 14, squeezing into an overloaded jeepney on his way to school will now be a thing of the past, as is his being habitually late for school.

Norberto Jay Toledo, a Grade 7 student from Barangay San Joaquin, considered the bike an early Valentine’s gift. To repay the project’s donors, this son of a security guard promised to study hard to become a policeman.

Grade 10 student Myla Lorca, a Grade 10 student, said having a bike would help her finish school despite her family’s meager means. Now she no longer needs to borrow money from neighbors to ride the tricyle, said Lorca, whose father is a carpenter.

One of the donors, Roberto Eduardo, chief executive officer of AgriDev Corp., said he was touched by the students’ appeal for bicycles when he read their story and realized their determination to attend their classes despite trudging a rocky road to school.

Another donor, Vicente Ocampo IV, said he was happy to share his blessings with the students of Albay, his home province.

“We believe every child has the right to proper education,” he said.

Jovi Mendoza, a mechanical engineer, said members of his group, called “Happy Boys,” donated bikes because they also felt they had to share their blessings with the less fortunate.

Riding bikes to school is sustainable and environment-friendly, he added, as this type of vehicle does not use gasoline and has no carbon emissions.

Mayor Noel Rosal said the project would encourage a healthy lifestyle among residents of Legazpi, where bike lanes had been put up.

How biking around Manila has made my life better