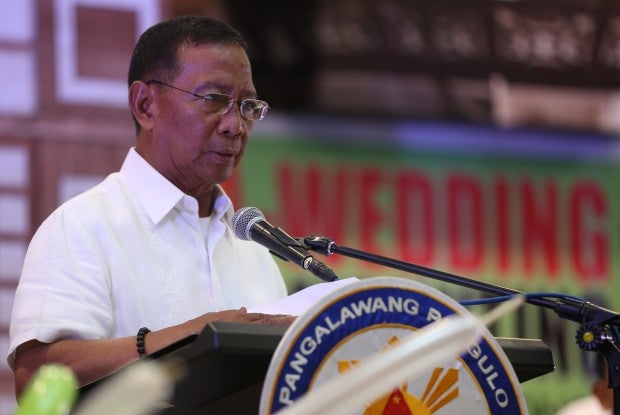 With his campaign powered by a veteran political strategist, Vice President Jejomar Binay on Friday said he could maintain the lead in the race for Malacañang despite allegations of graft and corruption hounding him and his family.

Binay confirmed the advisory role of veteran political strategist Ronaldo Puno in his presidential campaign, citing how good the former secretary of the interior was at his job.

“Yes, but I don’t know if that’s newsworthy. Secretary Puno has been helping us, and he’s really good,” Binay told reporters in Unisan town, Quezon province, a transcript of which was sent to reporters in Manila on Friday.

When a reporter in Unisan asked him about Puno’s reputation as “a magician” in elections, Binay said he would not respond to a question based on unsubstantiated claims.

“As usual, I don’t want to reply to a question like that. Because I am also a victim of allegations, demolition by perception…  All of that are just allegations,” he said.

Binay is accused of graft and plunder in the Office of the Ombudsman over alleged overpricing of municipal projects during his three terms as mayor of Makati City.

But charges cannot be filed in court against him as long as he is in office.

The Ombudsman, however, has affirmed the dismissal and indictment for graft of his son, former Makati Mayor Junjun Binay.

As reported by the Inquirer on Friday, Puno joined Binay’s flagging presidential campaign last September, reenergizing it and putting the Vice President back on top in voter preference polls.

The report alarmed the camp of Sen. Grace Poe, Binay’s closest rival for the presidency.

“That’s a cause for concern and worry, with his background and reputation. He’s known as a good operator,” said former An Waray Rep. Florencio Noel, a member of Poe’s campaign team.

Noel said, however, that Poe’s team would mount a good campaign.

Cebu Rep. Ace Durano, Poe’s campaign manager, said Puno was a capable man and that he had known him since their days in the Arroyo Cabinet.

But Poe’s team has its own strengths, Durano said.

“I’m very confident with our own group. We are very diverse. We came from different backgrounds and different orientations. At the end of the day, it’s a combination of all of these resources that will make the candidate win,” he said.

Valenzuela Mayor Rex Gatchalian, spokesperson for Poe, said Durano and Noel had the skills and experience to match Puno’s.

“We know that elections are won on clear messaging, superior logistics and vast networks. We are very confident that [Representatives] Noel and Durano will launch a campaign to match or even better the campaigns of our opponents who have vast resources,” Gatchalian said.

“The leadership of our campaign manager, Speaker Sonny Belmonte, partnered with the energy and enthusiasm of our volunteers, should be more than sufficient in my view,” said Barry Gutierrez, spokesperson for the LP coalition.

Asked about the looming battle with Puno, Belmonte tried to sound modest.

“He’s more accustomed to the job, that’s for sure,” he said in a text message in Filipino to the Inquirer. “He’s been there all along,” he said, indicating he had known for some time that Puno was running Binay’s campaign before the Inquirer reported it on Friday.

“He will definitely be an asset in [the campaign],” Gutierrez added.

“Former Secretary Puno is a veteran political operator whose reputation, which is either impressive or awful depending on one’s perspective, definitely precedes him,” he said. “He will feel right at home in the traditional machinery-based campaign of the VP.”

The Inquirer tried to reach Puno for comment, but remained unable to get through to him as of press time last night.

David is “in charge of civil society volunteers,” he said.

Binay confirmed that Puno came aboard his campaign since last year after he and other members of his team approached the former interior secretary.

Puno has been out of public sight since the end of the Arroyo administration.

“He’s good, because, you know, he is battle-scarred. He has gone through several elections as campaign manager, and [he has] good ideas. Very innovative,” Binay said.

Binay, however, would not attribute his recovery of the lead in the polls to Puno’s work alone.

“It’s a collective effort, it’s group work. Everybody participated. When we see each other, we exchange notes until we reach the final decision,” he said.

Binay expressed confidence that he could keep the momentum, after regaining the lead.

“The momentum is there. In fact, many political analysts admitted that they never expected it, how we recovered. Because they said, ‘He’s no more, [his campaign] has collapsed.’  But as it turned out, we came back,” Binay said.

He made little of his rivals’ ads hitting him, saying: “They will no longer have an effect, because they are about the same old thing.”