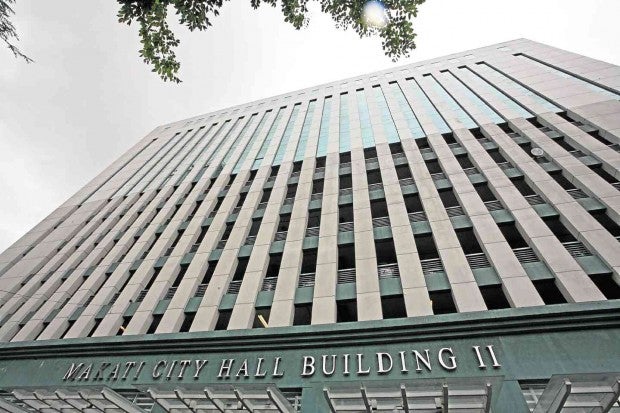 OVERPRICED? The controversial and allegedly grossly overpriced Makati City Hall Building II has been cited in the Ombudsman’s decision to uphold the dismissal of Makati Mayor Junjun Binay from service. INQUIRER FILE PHOTO

The Office of the Ombudsman has ruled out the possible return of sacked Mayor Junjun Binay to Makati City Hall.

The antigraft body has upheld its order imposing a lifetime ban on the son of Vice President Jejomar Binay and 19 others from serving in the government in relation to the allegedly graft-tainted construction of the P2.28-billion Makati City Hall Building II.

In three separate orders resolving a motion for reconsideration brought by the younger Binay, the Ombudsman affirmed the sacked mayor’s indictment in the Sandiganbayan for multiple counts of graft, malversation and falsification of public documents.

In one of the resolutions, Ombudsman Conchita Carpio Morales maintained that her office has the authority to place the Vice President under investigation while acknowledging that he could not be charged criminally or removed from office since he was an impeachable officer.

The Vice President is accused of graft and plunder in the Office of the Ombudsman over alleged irregularities involving municipal projects, including Makati City Hall Building II, during his three terms as mayor of the city.

The scandal arose from a complaint filed by Makati City Councilor Renato Bondal in the Ombudsman in 2014, triggering an investigation by a Senate blue ribbon subcommittee that lasted more than one year.

The Vice President never faced the Senate investigation. His camp has repeatedly dismissed the inquiry as a sham and a political exercise aimed at undermining his campaign for the presidency.

In a separate statement, the Ombudsman said the cases against the Vice President “will be filed after the expiration of his term, consistent with the principle that “an impeachable officer, while in office, cannot be the subject of a criminal indictment in court.”

“This office’s authority to investigate Binay is in accordance with the Constitution, law and jurisprudence,” the special panel of Ombudsman prosecutors headed by Adoracion Agbada said in its resolution.

The resolution said the 1987 Constitution gave the Ombudsman the power to look into “any illegal, unjust, improper or inefficient act or omission of any public official, employee, office or agency.”

“It bears recalling that the assailed joined resolution resolved to hale Binay to court after his term of office as an impeachable officer expires,” the panel said.

Interestingly, the Ombudsman issued its decisions a few weeks after Binay regained the top spot in voter preference polls in May’s presidential election.

The antigraft body provided copies of the documents to the media yesterday.

The Vice President’s camp slammed the Office of the Ombudsman for bias and partiality in announcing the resolutions four days before the start of the campaign.

In a statement, Binay’s spokesperson Joey Salgado said the resolutions had been “expected,” and dismissed these as part of an “orchestrated” effort by the ruling Liberal Party (LP) to derail the Vice President’s campaign for Malacañang.

“So what else is new? We have always expected these resolutions from a biased and partial Ombudsman,” Salgado said.

He said the Vice President would disprove the allegations “in an impartial court.”

The Ombudsman’s “agenda” in affirming the finding of probable cause against the Vice President and his son was obvious, he said.

Salgado cited the role of Binay’s rival for the presidency, LP standard-bearer Mar Roxas, and the machinery behind him in discrediting the Vice President in the run-up to the elections.

“Simply put, the move of the Ombudsman fits into the orchestrated effort of Mar Roxas, the Liberal Party and its allies, including Roxas’ mouthpieces masquerading as Palace spokespersons, to attack the Vice President,” Salgado said.

Responding to Salgado, Roxas’ camp said Binay and his family only got their comeuppance in the Ombudsman decision to affirm the criminal charges against them.

“The Binays were given all the opportunities to defend themselves. This is the result, and now they need to face the charges,” said Barry Gutierrez, spokesperson for the LP-led administration coalition.

“Mayor and VP, there is no escape,” Gutierrez said. “Expose the truth of what you really did in Makati. Justice must be served for the embezzlement of the people’s money.”

“For good [government] to thrive, the rule of law must be upheld,” Presidential Communications Secretary Herminio Coloma Jr. said, commenting on the Ombudsman’s decision.

“The Aquino administration has endeavored to adhere to this principle in order to gain public trust and confidence in the propagation of [reforms],” Coloma said.

The panel of state prosecutors also denied for lack of merit the separate motions filed by Binay et al. seeking reversal of the Ombudsman’s decision finding them administratively liable for grave misconduct, serious dishonesty and conduct prejudicial to the best interest of the service.

“The pieces of evidence presented… constitute substantial evidence of respondents’ deliberate participation in the irregularities in the procurement and release of payments for the design and construction phases of the parking building,” the panel said.

“The respondents’ contention that the complainant failed to conclusively prove the existence of conspiracy among them and that they acted in acquiescence or agreement to cooperate in any scheme fails,” it added.

Likewise included as private respondents in the criminal cases were Orlando Mateo of Mana Architecture and Interior Design Corp. and Efren Canlas of Hilmarc’s Construction Co., the contractor of the controversial parking building.

The Ombudsman said City Hall did not conduct a public bidding when the contract for the design of the multibillion-peso infrastructure project was awarded to Mana in November 2007.

At the time, the Vice President was the mayor of Makati, one of the country’s richest cities and long regarded as the main financial district.

“The evidence showed (that) the procurement process was manipulated to ensure the award of the contract to Mana,” the Ombudsman said.

It said the payment of P12 million to Mana was approved “despite the incomplete submission of deliverables such as design plans, working drawings and technical specifications.”

According to the Ombudsman, Binay and the others “colluded” with Hilmarc’s to “manipulate” five public biddings to ensure that the construction firm would win the lucrative project.

“The construction projects were awarded to Hilmarc’s despite the lack of the required publication of the invitations to bid, with Hilmarc’s as the lone bidder in four phases of the project,” it noted.

The Ombudsman said the erring public officials violated the law as the construction of the parking building started despite the failure of Hilmarc’s to present the approved design standards, contract plans, agency cost estimates and detailed engineering and programs of work.

“No preprocurement conference was undertaken and bid documents were made available only for one day in violation of procurement rules and regulations,” it said.

It also questioned the “extraordinary speed” with which the negotiation and evaluation of bid proposals were conducted in November 2007.

Said the Ombudsman: “For one hour only, the bids and awards committee completed the entire negotiation proceedings where bid proposals of seven architectural firms that allegedly participated in this project were opened and evaluated.”

Further, the Ombudsman said the “quantum of proof required to support indictments in preliminary has been met.”

In junking the motion for reconsideration of Binay et al., the panel of state prosecutors said the accused were given enough time to explain their side and present their own evidence.

“Indeed, a preliminary investigation is not the occasion for the full and exhaustive display of the prosecution’s evidence… as well as the admissibility of testimonies and evidence,” it said.

“Such matters are best raised and ventilated during trial on the merits.” With reports from Tarra Quismundo, DJ Yap and Nikko Dizon