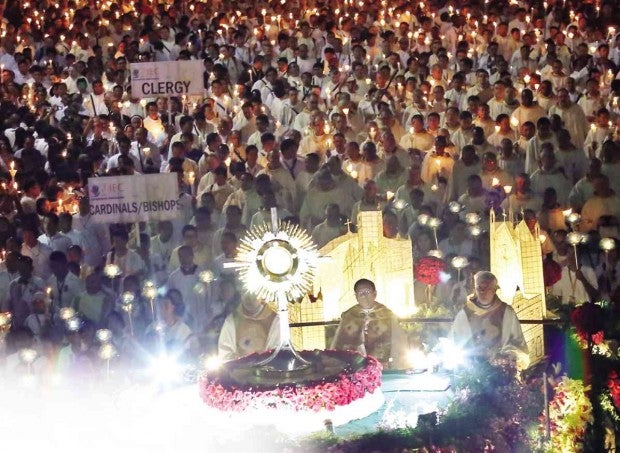 THE MONSTRANCE is all lit up as it becomes the centerpiece of a procession on the streets of Cebu City by thousands of delegates in the International Eucharistic Congress, one of the Catholic Church’s biggest events. JUNJIE MENDOZA/CEBU DAILY NEWS

There is nothing ordinary about the monstrance, the receptacle for consecrated hosts, that stood out during the International Eucharistic Congress’ (IEC) grand procession in Cebu City on Jan. 29.

It stands 4 feet tall and weighs 45 kilograms, almost as heavy as a sack of rice. The design veered away from the usual images of wheat or grapes associated with the Eucharist. Instead, the monstrance featured a Filipino touch—malunggay leaves, pearls and sampaguita.

Msgr. Marnell Mejia, the Cebuano priest who designed the monstrance, said that in his design he decided to highlight items closely identified with Filipinos.

Mejia said he drew inspiration from a picture of malunggay leaves on the soup of Pope Francis during the Pope’s visit to Tacloban City, Leyte province, in January 2015.

He said malunggay, or moringa, was the basic ingredient of otan bisaya, a vegetable-based soup that is popular in Cebu province.

Mejia recalled that when he showed his design to Jesse Pingol, of the Mamerto Pingol Metalcraft in Manila, who worked on the monstrance, Pingol was surprised by the highlight on malunggay leaves.

“When I presented the idea of using malunggay instead of wheat, (Pingol) asked me, ‘Father, why malunggay?’ And I told him, ‘Why not?’” he said.

Mejia said malunggay had elements and properties that point to the “bigger realities” of the Eucharist.

“First, malunggay is synonymous to health. Second, it has medicinal properties. These things point to the Eucharist, which is food for our spiritual life,” he said. Like malunggay, he said, “the Eucharist heals.”

Dubbed “the wonder vegetable,” malunggay leaves contain calcium, magnesium, protein, potassium, chlorophyll, polyphenol, vitamins A, B, B2 and C and the amino acids, arginine and histidine.

Another feature in the design of the monstrance are five pearls and sampaguita.

Mejia said the pearls represented the country’s title, “Perlas ng Silanganan” (Pearl of the Orient), while the sampaguita is the Philippines’ national flower.

The number of pearls and sampaguita on the monstrance represents the nearly five centuries of Christianity in the Philippines.

The custom-made monstrance costs about P400,000. But two Metro Manila-based donors, whose names were kept confidential by the Archdiocese of Cebu, paid for the monstrance, said Mejia, chair of the IEC procession committee.

“This is basically Manila’s gift to Cebu for the IEC,” he said.

Mejia said the monstrance had to be 4 feet tall to make the consecrated host (bread blessed to symbolize the Body of Christ) seen by as many people as possible during the 3-km procession from the Cebu Capitol to Plaza Independencia.

“It is but proper to give prominence to the Eucharist by having a huge monstrance. It is our way of saying, ‘It is the Lord’ in his real presence,” he said.

The monstrance is supported by three metal foundations that are bound to represent unity among the country’s three main islands: Luzon, the Visayas and Mindanao.

Its base rises to form a cross—the foremost symbol of the Roman Catholic faith and Christianity.

Like the traditional monstrance, it features 51 sun rays around the spot where the Blessed Sacrament is exposed.

Mejia said the rays signify the number of years that the IEC had been held in different countries.

While not visible from afar, it has four arrows mimicking those of a compass that are attached to the cross to symbolize the missionary aspect of the IEC.

The word “Mass,” Mejia said, means “go forth” to the farthest corners of the world and spread the faith.