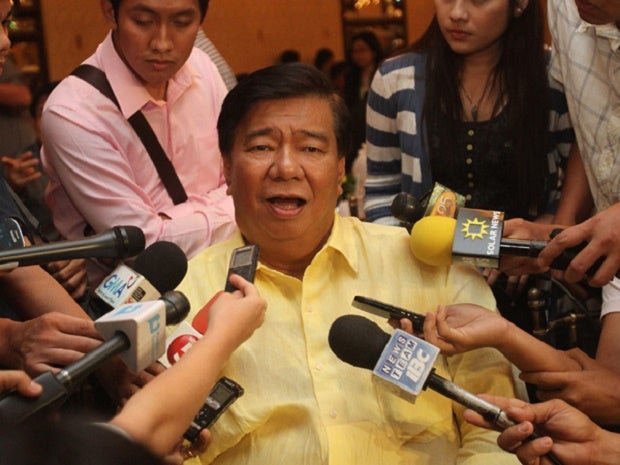 Senate President Franklin Drilon on Thursday said he had asked the Commission on Appointments (CA) to study a possible amendment to a provision in the CA rules that allows a member to block the confirmation of government appointees for no reason at all, saying he wanted “to shield career officials from politics.”

“I have asked the secretary of the CA to study how we can amend the rules so that Section 20 cannot be used arbitrarily, and in order that we can shield career officials from politics,” Drilon said.

But Enrile bucked the proposal and described it as a move to clip the powers of the opposition.

“That (provision) is the weapon of the opposition against the rapacity and irresponsibility of the ruling clique,” Enrile said at a Senate forum, adding that the rule had been in place since the time of President Manuel Quezon.

“Why are you going to destroy the power of the opposition in order to control the country? No way,” the Senate minority leader said.

Enrile said he had blocked the confirmation of the seven career officials to give the next President a free hand in appointing people, especially ambassadors who will represent him. Ambassadors have a three-year term, he added.

As for blocking the appointment of an audit commissioner, Enrile said the auditor was in charge of guarding the use of public funds so the next President should be able to choose the auditor who could be tasked with checking the wrongdoing of the previous administration.

Enrile invoked Section 20 of the CA rules when he deferred the appointment of the seven officials until May 25 when Congress resumes session.

Speaking at the Kapihan sa Senado on Thursday, Drilon said he was “saddened” by Enrile’s move, especially since the appointees were all career officials.

Asked whether Enrile had any political motive in derailing the appointments, Drilon said, “You can judge for yourself.”

He added: “There is no question on the qualifications of the career people to be confirmed to the posts that they were nominated for.”’

A paper prepared by Drilon’s office showed that Section 20 was adopted verbatim from the 1968 rules of the CA.

Congress goes on sine die adjournment in June when the new president comes in.

Enrile is identified with the camp of Vice President Jejomar Binay, a rival of the administration party’s standard-bearer Mar Roxas for the presidential post.  The Senate minority leader had been attacking the Aquino administration in recent weeks, and had moved for the reopening of the investigation on the Mamasapano, Maguindanao, massacre that led to the death of 44 Special Action Force troopers.  Enrile had placed the blame for the massacre squarely on President Aquino.