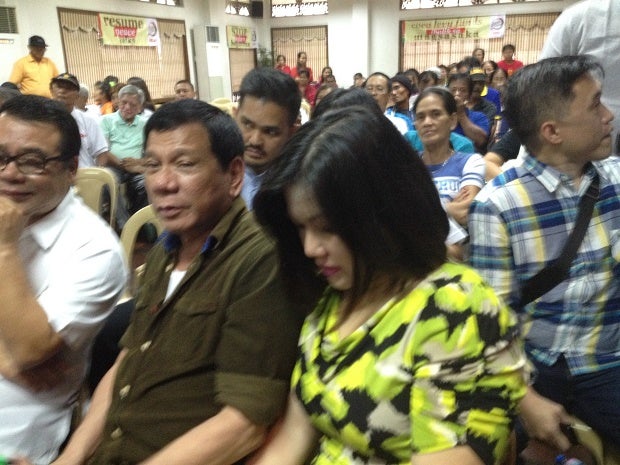 In a rare public appearance outside Davao City, Mayor Rodrigo Duterte’s common-law wife is now more visible in joining her husband in campaign activities for the upcoming elections in May.

Cieleto “Honeylet” Avancena joined her husband in a forum at the University of the Philippines-Diliman and later at a business forum in Makati City on Wednesday.

Asked if she would also join Duterte in his campaign sorties, Avancena said she would be more visible as the official election campaign starts on February 9.

No longer a womanizer

Avancena said her husband is no longer a womanizer.

(I was caught (womanizing) that’s why she is always following me.)

Last Tuesday, Duterte said his first wife Elizabeth Zimmerman and Avacena will have separate rooms in Malacanang if he becomes president.

Zimmerman, Duterte’s estranged wife, is the mother of Sara, who is now running as Davao City mayor.

Asked about her thoughts, Avancena said she sees no problem in living with Zimmerman in Malacanang if Duterte wins the presidency.

(She is a mother and came ahead of me. She is Sara and her siblings’s mother. It cannot be taken from her.)

Avancena and Duterte have an 11-year-old daughter. RAM

Duterte: I have 2 wives and 2 girlfriends