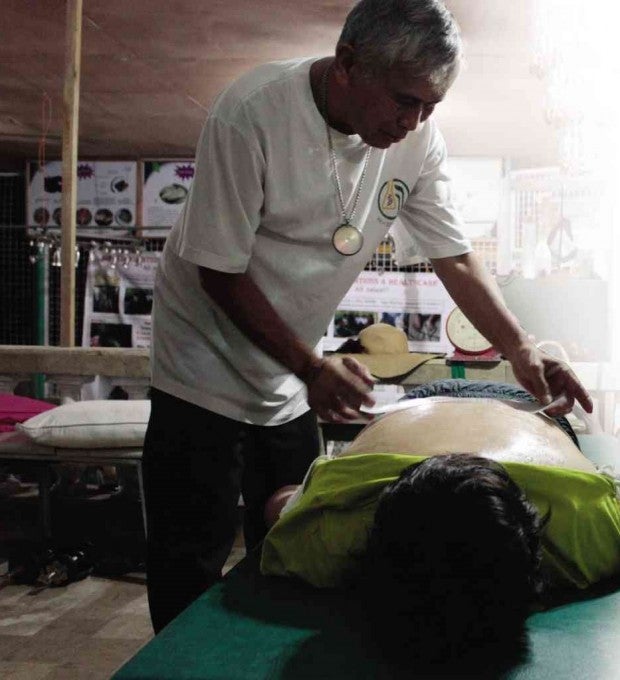 CALL HIM crazy, but Alfredo Calendacion Sr., offers a cure to almost all kinds of common illnesses and disorders.

Calendacion, 72, is an inventor from Los Baños town in Laguna province who practices alternative healthcare. In 2008, he invented a handheld massage machine and a thermal bath that both use electromagnetic waves to stimulate better blood circulation. These waves, he said, activate the body’s own impulses thus reinvigorating the entire body.

“Some people call me crazy,” he said. “Others didn’t believe at first, until the second or third treatments.”

Calendacion used to be a plant breeder at the University of the Philippines Los Baños for 15 years. He also worked at the International Rice Research Institute (Irri) before becoming a consultant for the Department of Agrarian Reform.

On his retirement, Calendacion said he asked God what else he was supposed to do. But if there was anything he was sure of at that time, he said he wanted to help his community.

Calendacion put up the CALE Health Massage, which he described as a “movement” of people believing in alternative and natural treatment. CALE, taken from the first four letters of his surname, may also stand for “Christ Alpha Loves Everyone,” he said.

Calendacion’s “clinic” at home is a room full of framed certificates and recognition on his practice. Assisted by his 21-year-old grandson, Ian, he attends to his clients, most of them elderly, seeking treatment to what mainstream medicine has failed to cure.

He offers treatment to people with neurological disorders, Alzheimer’s disease, multiple sclerosis, Parkinson’s disease, osteoporosis and stroke, among others.

Calendacion conducts an “assessment” or a diagnosis of the patient’s condition using his electromagnetic massage machine (also called polar massage machine). It is a small metal cylinder that contains magnetic stones and is connected through wires to a person’s palm or feet. As one manually turns its handle, the machine creates electromagnetic frequency that sends impulses through the patient’s body.

“(These impulses) melt away cholesterol. You’re like a cellular phone being recharged,” he said.

The thermal bath, another of Calendacion’s inventions, uses a tub filled with deep sea sand that contains magnetic crystals. Heated at the right temperature, the patient sweats out toxins, thus enhancing his organs’ functions and improving his circulatory system, metabolism and growth, Calendacion said.

These inventions were patented in 2010.

Calendacion’s services were not exactly cheap (as indicated on the clinic’s website: calehealthmassage.weebly.com) and sometimes recommends multiple sessions depending on a person’s condition. But not a few people, with their testimonies posted on the website, claimed to have felt better after treatment.

“There was one limping and was able to walk better. Another, who was almost deaf, was able to hear. You see, it’s just like those (in the lyrics of) ‘Doon Po Sa Amin,’” Calendacion said, referring to a popular Filipino folk song about people who were healed of various ailments.

Calendacion said he is not a doctor, but would not classify his practice as faith healing, either. He calls himself a “scientific healer,” whose practice is based on science and research.

CALE Health Care also offers its services in Kamias district in Quezon City and in Sariaya town in Quezon province.