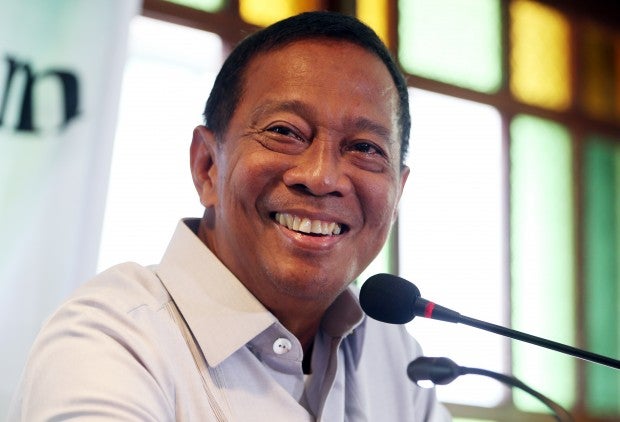 CEBU CITY—Vice President Jejomar Binay is consolidating his forces in Cebu, threatening the influence of the Liberal Party (LP) in a province with the most number of voters.

Binay has renewed his alliance with the One Cebu Party of the Garcia clan and secured a pledge of support from political veterans in Cebu City, like the Cuenco family, and from former Senator and now Toledo City Mayor John Osmeña.

This means that Binay, who is running for President in May, has a good chance in three out of seven districts in the province, where he did poorly in the vice presidential race in 2010.

His dismal performance in Cebu has apparently pushed Binay to work harder, with 2.7 million votes at stake in both Cebu City and the province.

On Monday, eight days before the start of the presidential campaign period, Binay quietly flew to Cebu.

He had a luncheon meeting with Winston Garcia, former general manager of the Government Service Insurance System, who is the gubernatorial candidate of One Cebu.

In the meeting were the members of the Garcia clan—patriarch and former Rep. Pablo Garcia, son Winston and daughter Rep. Gwen Garcia.

After the meeting, Binay went to meet Osmeña.

In the evening, Binay had dinner in the house of suspended Mayor Mike Rama in Cebu City.

Present at the meeting were the members of the Team Rama slate, including former mayor Alvin Garcia, who is running for congressman. Also at the meeting was former Rep. Antonio Cuenco, one of the leaders of the anti-Marcos movement in Cebu in the twilight years of the dictatorship.

“I have known him (Binay) for a long time. I know that he is a good manager and he is what the country needs,” said Cuenco, whose son, Ronald, is running for councilor.

Cuenco said the dinner was supposed to be limited to Team Rama candidates and allies but 500 people, including barangay officials, showed up.

While Binay was having dinner with his allies, Winston Garcia released a statement declaring support for Binay.

“(He) has a proven public service track record,” the statement said. “He has also presented the most credible platform of government among the other presidential candidates.”

The statement said the group also took into consideration accusations of corruption against Binay.

“The majority of the members of One Cebu believe that the Vice President would answer at the right time and at the right venue… the issues that have been raised against him,” said Garcia. With reports from Doris C. Bongcac and Carmel Loise Matus, Inquirer Visayas