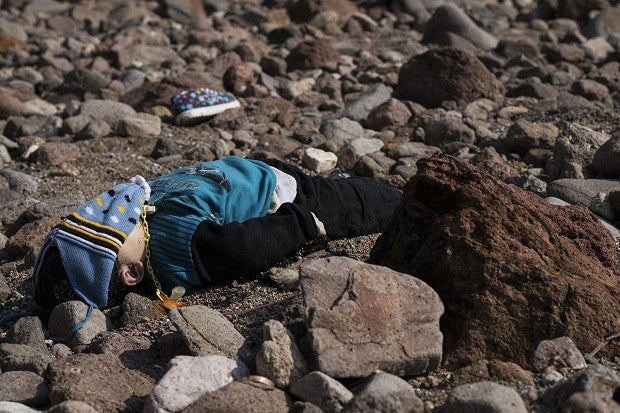 In this Saturday, Jan. 30, 2016 file photo, the lifeless body of a migrant boy lies on the beach near the Aegean town of Ayvacik, Canakkale, Turkey. Have we hardened so much, so fast? Five months ago, a 3-year-old Syrian boy’s corpse on a Turkish beach galvanized public action. Now, strikingly similar images are generating little more than a collective shrug. AP FILE PHOTO

It’s partly about timing, circumstance and the exceptional power of last September’s photos of Aylan Kurdi.

But it’s also because sensitivities are growing dull. Boats arrive on Europe’s shores daily, or sink on the way — like the one that capsized off Turkey’s coast on Saturday, killing at least 37 people including babies and other young children.

Images from the latest tragedy, including the bodies of children, failed to generate the same level of shock.

Fears — that refugees will stage extremist attacks or molest women — threaten to displace compassion. And Europe has yet to find the magic solution to its migrant dilemma.

“The public seems to be kind of immunized. They don’t want to see it anymore,” said Melissa Fleming, spokeswoman for the UN High Commissioner for Refugees.

The photos of Aylan weren’t the first or last to document the fatal risk that families take to flee Syria’s war for something better in Europe. But his lifeless, tidily-dressed body — first face-down on the sand, later in the arms of a police officer — captured the collective imagination like no other.

In an era when images are ubiquitous and fleeting, it stood out.

Unusually, he was quickly identified and found to have relatives in Canada, which helped his story go global.

“People react very strongly to individual stories,” Fleming said. “It was a single boy on the beach, looking like my son, my little brother, in a sleeping position.”

The image became shorthand for the refugee crisis and government inaction. It triggered soul-searching on a global and personal level, and volunteers from Britain to Greece showed up to feed and shelter new arrivals.

On a policy level, its impact was mixed. It prompted an initial groundswell of pressure on leaders to act, but the European Union’s 28 states remain divided over how many refugees to take in, and how generously.

Since then, two Islamic extremists mixed in with refugees and joined European-born radicals staging deadly attacks in Paris. A string of robberies and sexual assaults in the German city of Cologne are blamed largely on migrants. European far-right parties have capitalized on the refugee wave.

Then another ship capsized off Turkey’s coast on Saturday en route to Greece. Babies and other young children were among the 37 dead.

The response has been more muted, though the horrors were not.

“I will never stop hearing those cries,” Durdu said Sunday, a day after the disaster. “They died screaming.”

Images of children victims encapsulated the drama. In one, a boy about Aylan’s age is lying on a rocky shore, a pacifier attached to his clothing with a plastic chain, a hat with a pompon on his small head. In another, a Turkish policeman readies an older boy for a body bag.

But for many viewers, the moment of awakening had already passed.

The new images saw marginal coverage in France, Germany, the Nordic countries and Poland. They drew little attention in Italy — but the country has no shortage of its own heartbreaking scenes on its shores and at sea.

Countries in the Balkans, closer to the source of the new arrivals, paid more heed.

In Greece, the sinking — the fourth in less than a week, and not the deadliest — was covered with equal horror and attention as all the other drownings.

In Hungary, tabloid newspaper Blikk had a large back-page spread including a small photo of Aylan’s body being carried by a rescuer and a close-up of the latest disaster. One of the headlines reads: “No one learned from little Aylan’s tragedy.”

On Hungarian news website origo.hu, several of the comments from readers blamed the parents for the drownings, saying they were irresponsible for undertaking unsafe journeys.

Some media weighed whether to show the latest images at all. One Hungarian newspaper warned the picture could have a harmful effect on children.

The Italian navy, after a boat capsized last year with about 800 migrants trapped inside, refused to allow or distribute any images of the dead out of respect for their memory.

“I can’t even understand what’s going on,” she said from her hair salon in Port Coquitlam in British Columbia. “The war needs to stop now.”

READ: After 1 million migrants, Europe’s borders are back