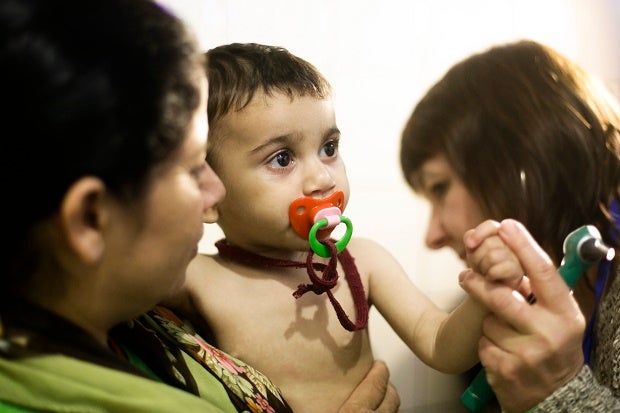 A boy from Syria gets a medical check from a volunteer at an emergency refugee shelter at a sports hall in Berlin in this file photo taken Oct. 23, 2015. The European police agency said over 10,000 migrant children had disappeared after arriving from the Middle East and other countries. AP

THE HAGUE, Netherlands — Over 10,000 unaccompanied migrant children have disappeared in Europe, the EU police agency Europol said Sunday, fearing many have been whisked into sex trafficking rings or the slave trade.

Europol’s press office confirmed to AFP the figures published in British newspaper The Observer, adding that they covered the last 18-24 months.

The agency’s chief of staff Brian Donald said the vulnerable children had disappeared from the system after registering with state authorities following their arrival in Europe.

READ: After 1 million migrants, Europe’s borders are back |As 2016 dawns, Europe braces for more waves of migrants

“It’s not unreasonable to say that we’re looking at 10,000-plus children,” Donald said, adding that 5,000 had disappeared in Italy alone.

“Not all of them will be criminally exploited; some might have been passed on to family members. We just don’t know where they are, what they’re doing or whom they are with.”

Donald said there was evidence of a “criminal infrastructure” established over the last 18 months to exploit the migrant flow.

The Observer reported that Europol found evidence of links between smuggling rings bringing people into the EU and human trafficking gangs exploiting migrants for sex and slavery.

“There are prisons in Germany and Hungary where the vast majority of people arrested and placed there are in relation to criminal activity surrounding the migrant crisis,” Donald said.

Over one million migrants and refugees, many fleeing the Syria conflict, crossed into Europe last year.

“Whether they are registered or not, we’re talking about 270,000 children,” Donald told the paper.

“Not all of those are unaccompanied, but we also have evidence that a large proportion might be,” he said, adding that the 10,000 is likely to be a conservative estimate.

He said many of the children are “visible”, and not “spirited away and held in the middle of forests”.

Raffaela Milano, Save the Children’s Italy-Europe program director, said that “unaccompanied minors who travel without adults are the most vulnerable group of the migratory flow”.

“Many minors, in fact, make themselves ‘invisible’ to the authorities to enable them to continue their journey in Europe, for fear of being sent back,” she said.

The UN children’s agency UNICEF also voiced alarm and urged European countries to do more to protect migrant children who are on their own.

“We urgently call for a plan within Europe for unaccompanied and separated children covering family reunification, relocation and other alternatives so that children do not end up being abused and exploited by smugglers and traffickers,” it said in a statement.

Many children arrive first on the Greek islands before making the journey to relatives across Europe.

Laura Pappa, president of the Greek charity Meta-Action, a group accompanying children who travel without relatives, said they “face a destiny that is worse than that of the rest of migrants waiting to be relocated”.

She said they often have to wait for around seven months to be reunited with relatives, and that procedures can be slow and complicated.

“There are some people that present themselves as uncles and take the children. It’s not easy in this mess to cross check the identity of the ‘uncle’.”

Pappa said the group has helped 3,000 children reach family, but that it “is not enough”.

Britain is one country that has said it will take in migrant or refugee children who have been separated from their parents.

Despite the constant risk of death and deportation, migrants continue to stream into Europe, risking their lives to escape poverty, repression and conflict.

Many children are among the refugees and migrants who have lost their lives making the perilous crossing in the Mediterranean.

In the latest tragedy, the Turkish coastguard recovered the bodies of women and children were washed up on a beach after their boat sank, leaving at least 37 people dead.

Tensions are escalating across the continent over the increasing numbers of migrants, with many right-wing groups calling for more immigration restrictions and tighter borders.

On Saturday, Swedish police said dozens of masked men believed to belong to neo-Nazi gangs gathered in Stockholm and handed out leaflets calling for attacks against young migrants.

And anti-fascist and far-right protesters clashed in a southern German town where unknown assailants threw a hand grenade into a refugee shelter on Friday, as the country scrambles to integrate the over one million asylum seekers it welcomed last year.