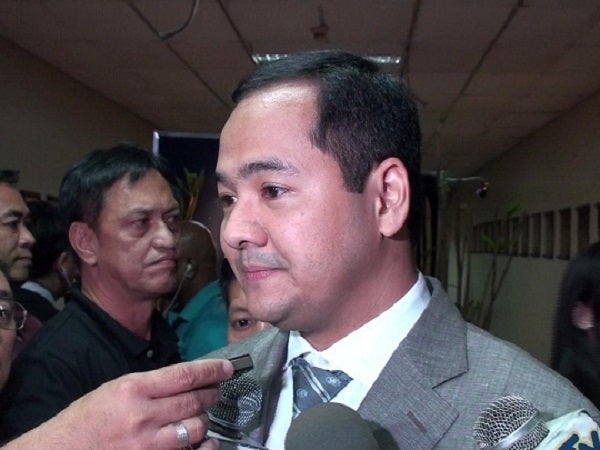 THE RACE to Malacañang this early is turning into a battle of negative political advertisements.

The camp of Vice President Jejomar Binay Monday cried foul over the spread of “spurious” commercials that were apparently aimed at reviving the web of corruption issues being hurled against the standard-bearer of the United Nationalist Alliance (UNA).

Rico Quicho, one of Binay’s spokespersons, claimed that the videos were the handiwork of the ruling Liberal Party (LP) and that these were part of the latest smear campaign of the allies of the administration’s presidential candidate, Mar Roxas.

Quicho said the coordinated efforts to vilify the UNA presidential contender “started in the Senate and continued up to this day through a deceptive advertisement.”

In a text message to the Inquirer, he said, “The elitist campaign to discredit the Vice President is nothing but lies and innuendos.”

“This is a manifestation of the vain attempt to compensate the gross inefficiency and lack of empathy of the LP’s presidential candidate through inappropriate mudslinging against another candidate,” he added.

Asked why he thought the LP was behind the political ads, Quicho said, “LP’s actions speak louder than words.”

“The participation of (LP) in the conspiracy to destroy the Vice President’s reputation is clear and obvious,” he added.

The three 15-second political ads came out in a major television network on Friday and have since been shared in social media by a group called “Supporters of Truth.”

Akbayan Rep. Barry Gutierrez, spokesperson of the LP-led “daang matuwid” coalition, said the administration-backed party had no hand in the supposed “attack ads” against Binay and that he himself had not seen the videos.

“I’m no longer surprised, though, that instead of facing up to these issues, Binay’s camp would rather blame (Roxas) and his supporters,” Gutierrez said.

Instead of pointing an accusing finger at the LP, Gutierrez said the Vice President should answer the allegations against him and his family.

“Citizens from all quarters have long been waiting for him to give clear, straightforward, honest answers to these charges. They are tired of getting the same old excuses and evasions,” he said.

Quicho surmised that the attacks against the Vice President were prompted by a recent survey that showed Binay regaining the top spot in the voters’ preference for President Aquino’s successor.

“When the latest survey results were released, the (LP) lost no time in mounting its offensive against the Vice President,” said Binay’s spokesperson.

Quicho said the attacks against the Vice President would not derail his campaign, but would only make him “push harder to explain his programs that will solve poverty and for the immediate delivery of basic social services for our people.”

He also took to task the LP which, he said, “owes it to the public to give accurate and truthful information about the present candidates.”

“Smear campaigning only muddles the important issues candidates must face. The Vice President is totally committed to solve the present moral problem of our country, which is poverty,” Quicho said.

A separate video, which has the same format as the commercials against Binay, questioned the American citizenship of Sen. Grace Poe’s husband and their three children.

Sought for comment, Valenzuela City Mayor Rex Gatchalian, Poe’s spokesperson, said it was unfortunate that Poe’s family had been dragged into politics and urged those behind the commercial not to use her children “as negative political story lines this coming elections.”

“Senator Poe is the candidate in the upcoming elections, not the members of her family,” Gatchalian said. “It’s sad that even her children (two of whom are minors) are being attacked when they are not the ones running.

He said the senator’s husband, who is a natural-born Filipino, had “already taken steps to give up his US citizenship.

“As for her children, she will leave it to the children to decide when they reach the right age,” Gatchalian said.