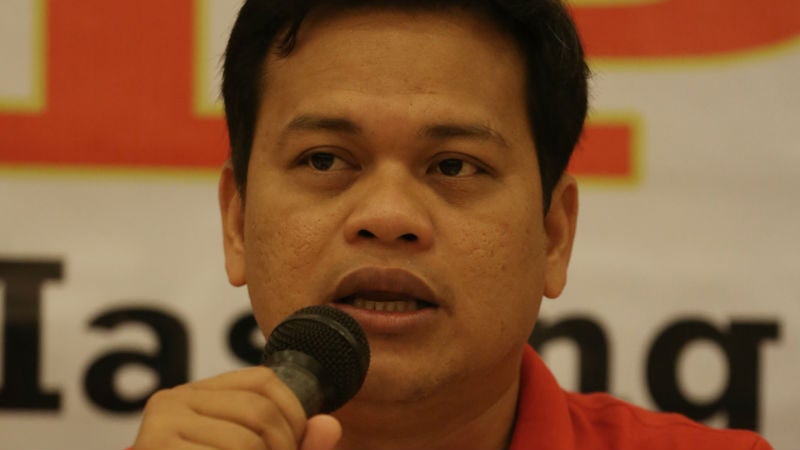 AND THEN there were six.

The standard-bearer of Manila Mayor Joseph Estrada’s Pwersa ng Masang Pilipino (PMP) party on Monday announced that he was backing out of the May 9 presidential race to support the candidacy of Vice President Jejomar Binay.

Romel Mendoza was one of the seven candidates included on the Commission on Elections (Comelec) initial list of presidential candidates released on Jan. 21.

In a press conference Monday, Mendoza thanked the Comelec for having confidence in the PMP to field a presidential candidate and for recognizing his qualifications despite a petition filed by the poll body’s law department to declare him a nuisance candidate.

The 40-year-old Mendoza admitted that he had filed his certificate of candidacy for president to reserve the slot for Estrada should the latter decide to run again for the position he once held.

“Mayor Estrada earlier declared his intention to run for president if Sen. Grace Poe is disqualified from the race or if Vice President Binay is jailed,” said Mendoza, also the secretary general of the Kalipunan ng Masang Pilipino (Kampil).

“I filed my candidacy to pave the way for this option for our former President and also as a sign of support by Kampil,” he said.

But since the Dec. 10 deadline for candidate substitution has long gone—with Estrada filing his bid for reelection in Manila and Poe’s disqualification case still pending in the Supreme Court—Mendoza said he deemed it right to withdraw from the race.

He also noted that Binay, who is facing corruption charges, was still on the official list of candidates.

“For this, I am informing my countrymen that I am withdrawing my candidacy for president and we will make this official with the Comelec so that my name will be removed from and not cause confusion in the official ballot for the 2016 elections,” he said.

“But we also want to announce that in withdrawing my bid, we are also endorsing the candidacy of Binay for president,” he said.

Kampil was throwing its support behind Binay because of what it described as his “pro-Filipino” and “pro-masses” agenda and platform of government.

“We believe that he is competent and he has the professional track record to lead the Philippines,” said Mendoza.

In an interview, Comelec Chair Andres Bautista said the Comelec will accept Mendoza’s withdrawal from the presidential race if he personally filed it before the election body.

“We will accept that if it happens. If it does, we might have six candidates for president,” said Bautista.

Under Comelec rules, any candidate backing out of the elections must personally file at any time before Election Day a sworn statement of cancellation or withdrawal before the poll body.

But noting Mendoza’s reason for filing his candidacy, Bautista said there might be a need for Congress to review the law on substitution of candidates to prevent politicians and political parties from abusing such provision and from “circumventing” nomination procedures.

“Probably, for the succeeding elections, we may need to assess this provision of the law and we call on Congress to look into whether we should still allow substitution of candidates,” he said.

Mendoza filed a sworn statement of withdrawal at the Comelec late Monday afternoon.