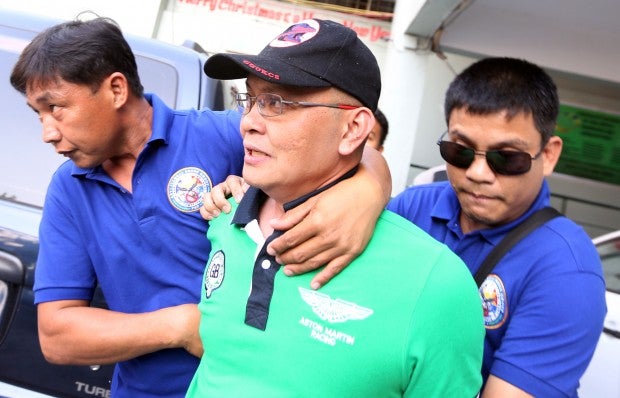 THE Department of Justice (DOJ) has supported the bid of detained former Philippine Drug Enforcement Agency (PDEA) official, Marine Lieutenant Colonel Ferdinand Marcelino and his Chinese companion Yan Yi Shuo to be transferred from the Bureau of Jail Management and Penology (BJMP) in Taguig City to either the detention facility of the National Bureau of Investigation (NBI) or the Philippine Navy.

“As publicly known, Lt. Col. Marcelino has caused the detention of many people involved in illegal drugs, some of whom are currently being detained at Camp Bagong Diwa,” Villanueva said in his letter.

Villanueva cited the testimonies of both Marcelino’s counsel, lawyer Dennis Manalo and Philippine Navy Vice Admiral Caesar Taccad, who both expressed concern for the safety and security of the arrested ex-PDEA official, who was detained at the QC-BJMP annex in Camp Bagong Diwa, Taguig City.

Manalo urged Villanueva to act on their motion to transfer detention last week after his client was moved to the Quezon City Jail Annex in Camp Bagong Diwa.

“Considering that Lt. Col. Marcelino has neutralized drug syndicates, cleansed attached uniformed personnel in the PDEA and caused the imprisonment of well-known personalities involved in drug related cases, it is in this light that his safety and protection must be highly considered and which can be better carried out if he will be detained in a Philippine Navy detention facility,” Villanueva said in his letter.

Manalo said his client fears for his personal safety and security “on account of the deep seated anger of prisoners in the QC-BJMP annex who have been arrested by respondent (Marcelino) arising in the performance of his duty.”

Marcelino’s intelligence works has led to the arrest of several drug traffickers including the so-called Alabang Boys, the raid in Camiling, Tarlac that yielded billions worth of drugs and the raid inside the New Bilibid Prison led by then Justice Secretary Leila de Lima.

Taccad also shared the same sentiments as that of Manalo.

In his letter to Acting Justice Secretary Emmanuel Caparas he cited Section 3c, Executive Order Nr. 106, s. 1937, which states that if a crime is committed by an Armed Forces of the Philippines (AFP) personnel or other law enforcement agencies, it is mandated that military offender should be delivered to the nearest AFP authorities.

The PN Admiral, however, clarified that they do not tolerate the misdeeds of Marcelino.

“We are one with the government in bringing to the bar of justice our personnel who are involved in criminal activities. We will also be conducting parallel investigation on the said incident to determine LTC Marcelino’s liability under the Articles of War,” read Taccad’s letter.

“Nevertheless, we would also like to ensure his (Marcelino) safety while under detention. As the former Director of the Special Enforcement Division, PDEA, he has neutralized drug syndicates, cleansed attached uniformed personnel in the same agency, and caused the imprisonment of well-known personalities involved in drug-related cases,” he added.

Marcelino and Yan were arrested in a drug bust in Manila last January 21 where authorities confiscated 76.697.7 grams of shabu worth over P380-million.