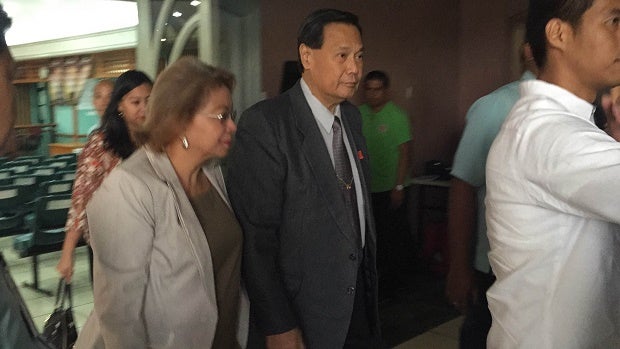 The Ombudsman wanted to get its hands on the alleged dollar deposits of ousted Chief Justice Renato Corona.

The Office of the Special Prosecutor has asked the Sandiganbayan to issue a subpoena to summon to a conference the officers of Deutsche Bank AG Manila before the Ombudsman.

Deutsche bank has one of the 82 dollar accounts of Corona where he allegedly stashed more than $12 million in fresh deposits, or those that did not move, from 2003 to 2012, including the period when he was facing an impeachment trial on false declarations of wealth.

It was Ombudsman Conchita Carpio-Morales who divulged such finding of the Anti-Money Laundering Council before the Senate impeachment court in May 2012.

In the motion, the prosecution asked the anti-graft court Second Division Clerk of Court Atty. Irene Estonilo-Palmero to summon the bank representatives Enrico Cruz, Chief Country Officer, or Celia Orbeta, Direct Securities Services Head, to a conference on Feb. 11, 9 a.m., at the Office of the Ombudsman.

The prosecution would want them to attest on the authenticity of the reproductions of a letter dated June 2012 from Deutsche Bank AG Manila Branch to Bureau of Internal Revenue (BIR) chief Kim Henares pertaining to Corona’s deposits worth $167,000 from 2002 to 2011.

The BIR had asked Deutsche to inform them about Corona’s dollar accounts after Corona waived his right to bank secrecy as he faced impeachment trial before the Senate.

The Deutsche attached in its letter to BIR a certification indicating the year-end balances of the custody account with the bank from 2002 to 2011.

Furthermore, the letter was attached with a certified true copy of the report showing the transactions on Corona’s custody account from the time it was opened until it was closed.

The Ombudsman is looking into Corona’s dollar accounts as it is prosecuting him over his P130.59 million civil forfeiture case.

So far, the anti-graft court is able to freeze at least P10,354.98 cash in the bank accounts of Corona and his wife Cristina, according to its three reports on the preliminary writ of attachment to put on hold Corona’s estate, real and personal properties as well as cash on bank with total worth of P130.59 million.

The court has also temporarily frozen the following properties of the Corona couple which allegedly were either undervalued or undeclared—condominium units from One Burgundy Plaza in Quezon City, The Columns in Makati, Bellagio I in Fort Bonifacio (including three parking slots), and Bonifacio Ridge, Fort Bonifacio as well as a parcel of land in La Vista in Quezon City.

On top of the civil forfeiture case, Corona also faces eight counts of perjury and separate eight counts of violations of the Code of Conduct and Ethical Standards for Public Officials and Employees for alleged underdeclarations of wealth in his Statement of Assets and Liabilities Networth (SALN).

READ: Sandigan finds probable cause to put Corona on trial for perjury

During its probe, the Ombudsman said that from 2001 to 2011, Corona and his spouse earned a total of P30.4 million, of which P27.1 million was earned by Corona as an official at the Office of the President, a Supreme Court justice, member of the Senate Electoral Tribunal and member of the House of Representatives Electoral Tribunal.

Meanwhile, his wife Cristina, earned P3.2 million from 2007 to 2010, based on the Alpha List submitted to the BIR by the John Hay Development Corp. where she was an employee.

In 2012, the Congress impeached Corona for false declarations of wealth in his SALN. RAM