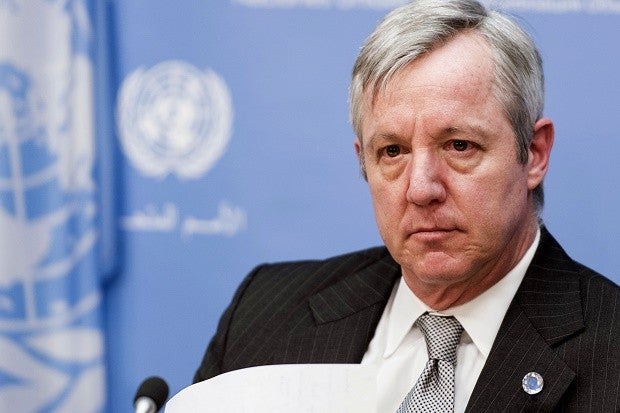 In this photo provided by the United Nations, Anthony Banbury, Assistant Secretary-General for Field Support, discusses the latest allegations of sexual exploitation and abuse with the media, Friday, Jan. 29, 2016 at United Nations headquarters. The U.N. human rights office says it has turned up six more cases of alleged sexual abuse against children by European troops in Central African Republic, including a 7-year-old girl who said she had to perform sexual acts on soldiers in exchange for water and cookies. AP

GENEVA — The UN human rights office says it has turned up six more cases of alleged sexual abuse against children by European troops in Central African Republic, including a 7-year-old girl who said she had to perform sexual acts on soldiers in exchange for water and cookies.

A UN team recently interviewed five girls and a boy who claimed their abusers were part of French and European Union military operations in the troubled African country, the office of High Commissioner for Human Rights Zeid Raad al-Hussein said.

The sexual abuse allegedly took place in 2014 in or near a camp for displaced people near M’Poko airport in CAR’s capital, Bangui, but only came to light in recent weeks, the latest in a string of similar allegations.

France, Central African Republic’s former colonial ruler, deployed several thousand troops to the country in late 2013 as violence between Christians and Muslims sent thousands fleeing from their homes. An African Union mission that began in April 2014 was taken over by a UN peacekeeping force five months later, while the EU force ended an 11-month mission in March last year.

It was the first time the world body had publicly named countries whose UN troops are accused, as part of a new policy.

Banbury also announced an allegation of sexual assault against a minor by a member of Morocco’s military contingent serving with the earlier AU mission.

For all of 2015, Banbury said, there are likely to be 69 confirmed allegations of sexual abuse or exploitation in the UN’s 16 peacekeeping missions around the world, including 22 in CAR. That’s up from 51 in 2014, when there were no reported cases in CAR, he said.

Banbury said UN Secretary-General Ban Ki-moon will issue a report next month with details of all allegations from 2015, including the names of countries whose troops are accused. The information, including the status of investigations, will be regularly updated online, he said.

“It’s hard to imagine the outrage that people working for the United Nations in the causes of peace and security feel when these kinds of allegations come to light,” Banbury said, his voice breaking.

The UN is under pressure to act more quickly after an independent panel last month described the world body’s “gross institutional failure” in handling similar allegations in CAR against French and other peacekeepers. The panel’s report said the months-long delay in addressing children’s accounts of abuse had led to even more reported assaults.

The UN can report such allegations, but countries themselves are responsible for prosecuting their troops over such crimes. Many do not.

The UN rights office said three of the girls said they believed their abusers were members of a Georgian contingent within a European Union force, and another girl was allegedly abused by a soldier from another European country that was not named because “additional corroboration is needed” in that case.

UN staffers interviewed a 7-year-old girl and 9-year-old boy who said they had been abused by troops in the French “Sangaris” operation. The girl said she had performed “oral sex on French soldiers in exchange for a bottle of water and a sachet of cookies,” the statement from Zeid’s office said.

A spokesman for Zeid’s office said the 7-year-old was the youngest alleged victim so far in any of the CAR cases. The two children said other children were abused in a similar fashion in repeated incidents involving several French soldiers, according to the statement.

France’s UN Mission tweeted on Friday: “France remains very mobilized in fight against violence and #sexualabuses & against impunity for those responsible.”

The EU’s foreign affairs service said the European Union was informed of the allegations on Jan. 19 and immediately offered assistance to the UN investigators.

“The EU takes these allegations very seriously,” said the statement.

Georgia’s Defense Ministry said it received the allegations “with great concern,” adding that “it is our goal to investigate this matter in great detail and in case such grave crimes are proven, perpetrators of such crimes will be brought to justice.”

Rupert Colville, a spokesman for Zeid’s office, estimated that troops from “something like 10” foreign military contingents in CAR have now been embroiled in sexual misconduct allegations. He said it was difficult to estimate how many individual soldiers might have been involved.

“What is abundantly clear in the CAR is that it’s been rampant,” Colville told reporters. “What this does show is this is a problem with armies, with the military forces, and for whatever reason not enough is being done to stop this happening — the message doesn’t seem to have got through.”

He said he was unaware of any convictions so far in any of the cases that have been brought to light.

Banbury said the UN was taking new steps to protect against sexual abuse, promote accountability and assist victims. Every single member of peacekeeping forces is now vetted, he said, and those involved in prior misconduct, human rights violations or serious crimes are not allowed to serve.

Other changes include acting within 24 hours of an allegation to collect evidence, including using rape kits and specially trained investigators. The UN is also asking troop-contributing countries to conclude their investigations of allegations within six months and report results — and “we now proactively suspend payments for personnel who are credibly accused of abuse,” Banbury said.

He also urged others to come forward with allegations, saying that people who don’t report the information they receive are “complicit in the crime.”