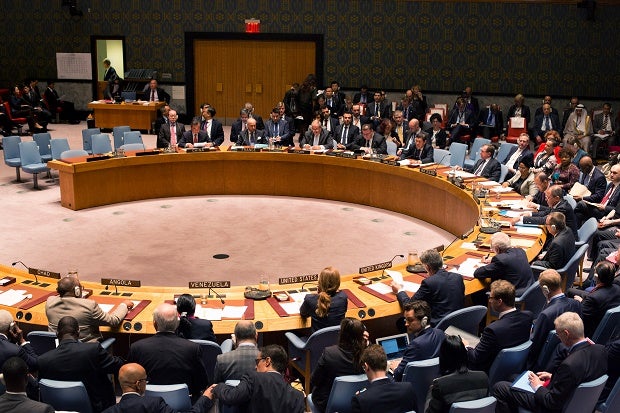 The call follows a series of sex scandals among the “blue helmet” troops on peace missions in Africa, especially in the Central African Republic.

The report was made public by UN Women, the international body’s office in charge of gender equality and female empowerment, to mark the 15th anniversary of a historic UN resolution on the important role of women in international peace and security.

At a press conference, Coomaraswamy said that under current rules peacekeeping soldiers can only be tried in the country from which they came—and this “does not happen often because countries don’t like their soldiers to be prosecuted anywhere in the world.”

Furthermore, some countries where peacekeepers have been deployed lack a judicial system that can guarantee due process and a fair trial.

The idea of a special tribunal comes from legal and academic experts, Coomaraswamy said, not from UN officials.

“I am not saying it is going to take off in a big hurry … but it is something could work on,” Coomaraswamy said.

Options include hybrid tribunals, or an international convention obliging contributing nations to judge their accused soldiers.

A better option “would be the establishment of an international tribunal, created under a treaty between states, with jurisdiction to try UN staff in the field and all categories of peacekeepers,” the report said.

Such a tribunal would handle “serious crimes committed by UN personnel, including sexual crimes.”

The report said that peace agreements that include input from women also have a better chance of success and called for greater female participation in UN peacekeeping missions.

“Peacekeepers can become role models for girls and women in the community” and reassure the local population.

The UN Security Council on Tuesday is scheduled to discuss women, peace and security, in an event marking the anniversary of Resolution 1325.

That resolution notes, among other things, that women are often excluded from participation in peace processes, and highlights “the pivotal role women should and do play in conflict management, conflict resolution, and sustainable peace.”