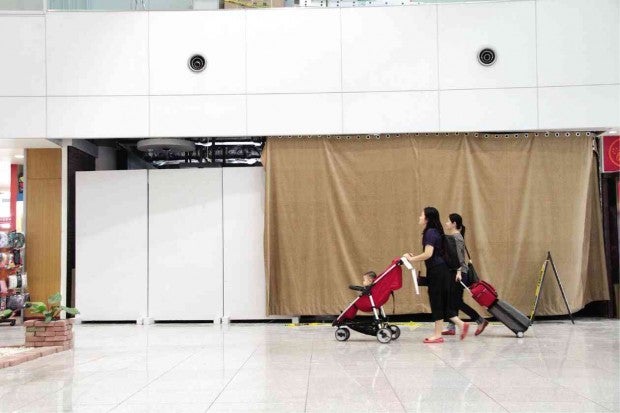 BREAKFAST INTERRUPTED The airport café with a faulty ceiling is closed and immediately boarded up Thursday. MIAA Media Affairs

Saying goodbye literally proved painful for an American passenger who was injured Thursday morning at Ninoy Aquino International Airport (Naia) when a portion of a restaurant’s ceiling collapsed on him.

The Manila International Airport Authority (MIAA) temporarily closed Sweet Ideas café at the 3rd level of Naia Terminal 3 to clear the debris and conduct a safety inspection of that section of the pre-departure area.

The MIAA said Day Adam Warner, 30, a passenger booked for a Narita-bound Delta Airways flight, was having a meal with his family around 7:30 a.m. when a part of the café’s decorative ceiling fell on their table.

Warner suffered scratches on his right arm and immediately received treatment from a medical team based at the terminal, Naia 3 manager Octavio Lina told the Inquirer.

In an interview with Agence France-Presse, Naia spokesperson David de Castro said the passenger insisted on leaving on his flight for Japan hours later.

Lina pointed out that the ceiling is technically not part of the Naia structure since it was an “aesthetic improvement” made by the café, one of the concessionaires at the terminal.

“The collapsed ceiling is a bit heavy though it is made of plywood. The passenger sustained scratches on his arm. Luckily his kid and wife were not hurt,” the manager added. The section that fell measured about 3 by 6 meters.

De Castro said the collapse did not involve the building’s concrete ceiling but rather a facade on which the café had affixed overhead lights.

It was the latest in a series of incidents at an airport seen as among the worst in the world. Part of Terminal 3’s ceiling collapsed in March 2006 and again in September 2008.

Similar mishaps happened at Terminal 2 in December 2012, where a Hong Kong-bound passenger was injured; and at Terminal 1 in February 2014.

Last year, Naia’s image also suffered another blow in the wake of the alleged “laglag-bala” scam, where bag inspectors were accused of planting bullets in passengers’ luggage to set them up for extortion.

Terminal 3 started operations in 2008 after a years-long legal row between the government and the Filipino-German consortium that built it, with the authorities citing breach of contract and a failure to conform with safety standards. Designed to handle 13 million passengers annually, it was built to decongest the older terminals.

While Terminal 3 has not suffered any major incidents since undergoing a major rehabilitation in 2013-2014, De Castro said, the 34-year-old Terminal 1 has a much more unfavorable reputation. Passengers have complained of leaking ceilings, collapsed floors, malfunctioning equipment, congestion, dilapidated facilities and rude or corrupt personnel.

It led to Manila topping a list of the world’s worst airports compiled by the travel website “The Guide to Sleeping in Airports” from 2011-2013.

However it has since improved its standing, and is no longer listed as the worst, partly due to decongestion as more passengers have begun travelling through Terminal 3.