Poe: Too many lawyers for MRT broth 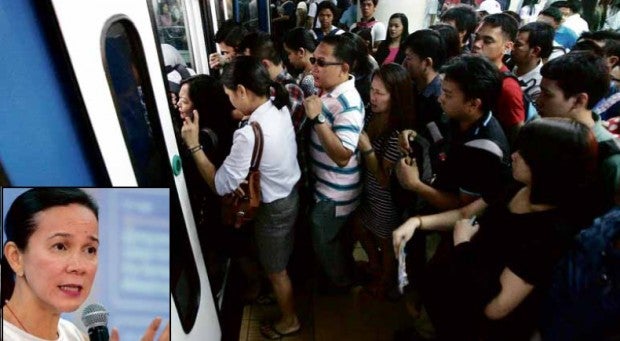 TRAIN OF ANGRY THOUGHTS In TV ads pushing her candidacy for president, Sen. Grace Poe (inset) has used the image of the long-suffering MRT riders as a symbol of what ails the country’s mass transport system. LYN RILLON/JILSON SECKLER TIU

A case of too many lawyers handling a technical problem.

This was how Sen. Grace Poe summed up the situation of the glitch-ridden Metro Rail Transit (MRT).

Poe, head of the Senate subcommittee on transportation inquiring into the MRT mess, said the problem with the MRT’s managers was their incompetence, shortsightedness, lack of managerial skills, and not knowing what to do.

“I’ve heard that during the time of [then Public Works Secretary Jose] Ping de Jesus, they already had experts and those knowledgeable and engineers in charge of all of these public utility transportation,” she said at the Meet Inquirer Multimedia Forum on Thursday,

But now, more lawyers are in charge, she said.

“The problem is after that, they replaced them with lawyers so they’re more into the legalities than the actual specification of what’s needed,” she said.

Apart from the long queues, MRT riders have to deal with packed coaches, service breakdowns, and nonfunctioning station elevators and escalators, among others.

There are clearly not enough trains, she said.

There is also no competent maintenance service provider and the trains were not rehabilitated early enough, she added.

Another key problem, the senator said, was the slow pace of project implementation.

“If we implemented the MRT7 project, by now it would’ve been running and could you imagine the traffic that would’ve been lessened from San Jose Del Monte, Bulacan, to the common station in Trinoma or SM?”

As to what she would do differently if elected President, Poe said she would hire a competent transportation secretary who is professional, has good managerial skills and has the integrity to run the agency well.

“One of the things I’d like to have is  an infrastructure room in Malacañang. I know it sounds so elementary, but sometimes, if you want things done, you just have to visit it every day and check on it yourself,” she said.