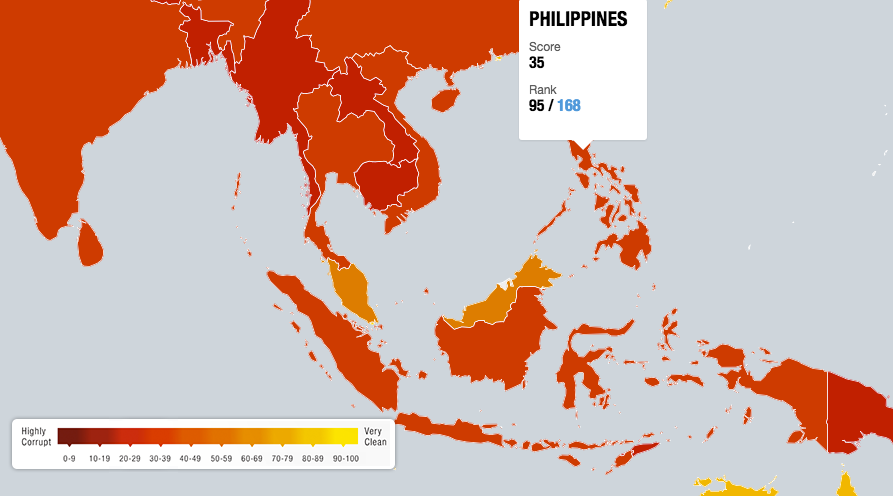 The Philippines has slid in the annual Corruption Perceptions Index (CPI) as it ranked 95th among 168 countries, Transparency International reported on Wednesday.

Obtaining a score of 35 out of 100, the country’s current rank is 10 notches lower compared to what it got last year.

The Philippines tied with Armenia and Mexico in 95th place.

The scores in the CPI, which could be from a scale of 0 (perceived to be highly corrupt) to 100 (very clean), are based on “expert opinions of public sector corruption.”

Transparency International also observed that two-thirds of the 168 countries have scores below 50, adding that no country in the world is completely corruption-free.

“The 2015 Corruption Perceptions Index clearly shows that corruption remains a blight around the world. But 2015 was also a year when people again took to the streets to protest corruption. People across the globe sent a strong signal to those in power: it is time to tackle grand corruption,” Transparency International Chair José Ugaz said.

Philippines scored 34 in 2012, 36 in 2013, and 38 in 2014 showing significant improvement in reducing corruption over past three years. View the full results here.

The following is the 2015 ranking of countries in the Southeast Asian region:

“If there was one common challenge to unite the Asia Pacific region, it would be corruption. From campaign pledges to media coverage to civil society forums, corruption dominates discussion,” he said.

“Yet despite all this talk, there’s little sign of action,” he added.

Plipat added that “political interference” and “inadequate resources” have prevented governments from making significant progress in their anti-corruption efforts over the past years.

“This year’s poor results demand that leaders revisit the genuineness of their efforts and propel the region beyond stagnation. They must fulfil promises, and ensure efforts aren’t undermined in practice,” he said.

“Anti-corruption commissions are a prime example here: while their creation across the region is commendable, ongoing political interference and inadequate resources has meant many are unable to fulfil their mandate.”

In Transparency International’s Corruption Barometer 2013 survey, the police was seen as the most corrupt government agency (69% of respondents) followed by public officials and civil servants (64%).

Nearly half of respondents also viewed the government as being run by “a few big entities acting in their own best interest.”

Visit the Philippines page of the Global Corruption Barometer to view the full results.

Meanwhile, North Korea and Somalia tied at the bottom of the list, scoring eight points.

Ugaz urged citizens to stand up and demand accountability from their governments.

“Corruption can be beaten if we work together. To stamp out the abuse of power, bribery and shed light on secret deals, citizens must together tell their governments they have had enough,” he said. RAM/MS

Is the Philippines really the most corrupt nation in Asia?