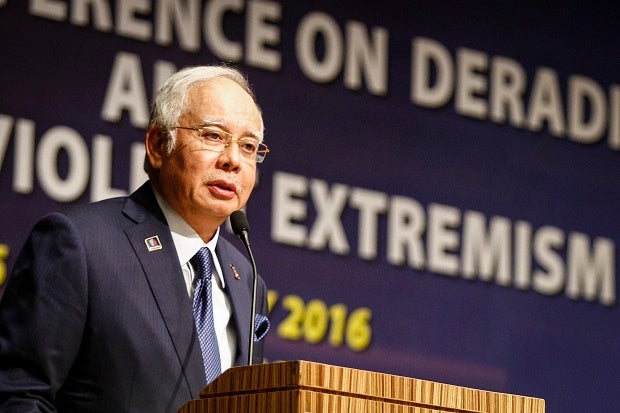 In this Monday, Jan. 25, 2016 photo, Malaysian Prime Minister Najib Razak speaks at a conference in Kuala Lumpur, Malaysia. Malaysia’s attorney general said Tuesday, Jan. 26, 2016, that nearly $700 million channeled into Najib’s private accounts was a personal donation from Saudi Arabia’s royal family, and cleared him of any criminal wrongdoing. The announcement capped months of uncertainty for Najib, who has come under intense pressure to resign over the financial scandal in his biggest political crisis since he took power in 2009. AP Photo

Attorney General Mohamed Apandi Ali said a review of evidence compiled by the country’s anti-graft agency showed that the money was a “personal donation from the Saudi royal family,” but gave no further details.

Najib has for months fended off accusations that the huge payment made into his personal bank accounts in 2013 was siphoned off from a now-struggling state-owned company that he had launched.

But until now, the source of the money has not been specified, other than claims by Najib’s government that it came from unnamed Middle East donors.

“I am satisfied that there is no evidence to show that the donation was a form of gratification given corruptly,” Apandi said in a statement after a review of evidence gathered by Malaysia’s anti-corruption agency.

“Evidence obtained from the investigation does not show that the donation was given as an inducement or reward for doing, or forbearing to do, anything in relation to his capacity as Prime Minister.”

The past fund transfers were revealed last July just as Najib was battling separate allegations that hundreds of millions of dollars were missing from deals involving the state company, 1Malaysia Development Berhad (1MDB).

Najib and 1MDB have strenuously denied any wrongdoing.

But the political opposition and even critics within Najib’s ruling party have called for a wide-ranging and independent investigation, accusing the prime minister of sabotaging official probes.

Shortly after the fund movements were revealed, Najib provoked fierce criticism by sacking Malaysia’s previous attorney general—who was investigating the matter—and installing Apandi, who has ties to the ruling party.