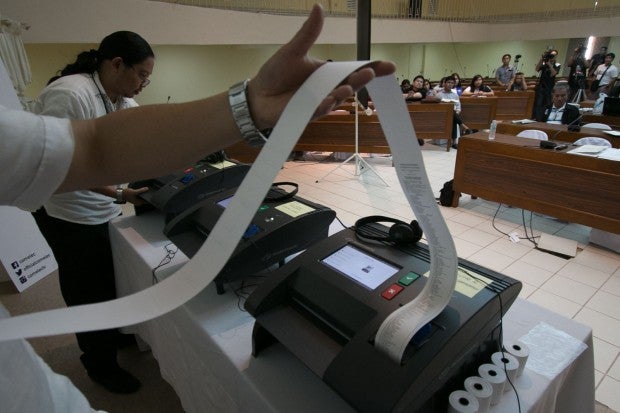 Comelec employees demonstrate the new Vote Counting Machines (VCM) as part of the Comelec’s roadshow to showcase the VCM’s new security features. The VCM’s will be used for the upcoming national elections this May. INQUIRER PHOTO/ ALEXIS CORPUZ

The Senate approved on the third and final reading on Monday a bill that seeks to raise the compensation of electoral boards and its support staff, who served in the elections, and to also make elections service “optional” for public school teachers.

“The teachers and all persons who rendered election service would also be entitled to a travel allowance of P1,000 each which is higher compared to the transportation allowance of P500 given in 2013,” Senator Aquilino ‘Koko’ Pimentel III, chairman of the Senate Committee on Electoral Reforms and People’s Participation and sponsor of the bill, said in a statement.

Once the bill is passed into law, Pimentel said, any person who causes the delay in the payment due to the BEI members beyond the prescribed period of 15 days from the election date should be liable for an election offense.

He noted that in the past elections, BEI members encountered delays in receiving their honoraria.

Pimentel said the bill would also grant five days of service credit instead of three to all government officials and employees serving as members of the electoral boards, DepEd supervisor/official and support staff.

The proposed ESRA also seeks to increase the death benefits from P200,000 to P500,000 and the medical assistance in such amount as may be “sufficient to cover for medical and hospitalization expenses until recovery” of injuries sustained while in the performance of election duties, according to Pimentel.

Under the measure, the Commission on Elections (Comelec) is mandated to establish a legal indemnification package for persons in any administrative, civil, or criminal action or proceeding rendering election service.

“We must ensure that the very people whom we rely on to manage the conduct of elections in this country are properly cared for, so that they may continue to preserve, with utmost pride and passion, the very foundation of our democratic system – an utterly free, honest and orderly election,” said the senator.

Pimentel said the bill would also give the public school teachers the liberty to choose whether to serve in the elections as BEI or not “by way of making the election service optional to protect them from political pressures and consider their personal welfare.”

Senate President Franklin Drilon said the measure was meant to address the concerns of the country’s more than 630,000 teachers currently tapped by the Comelec to help in the conduct of the upcoming polls:

“It is only timely that we give our teachers better benefits and options regarding their poll duties, given the risks they take in ensuring that elections are facilitated in a proper and clean manner,” Drilon said.

Meanwhile, the Senate also approved on third and final reading Senate Bill No. 886 which defines the role of the Armed Forces of the Philippines (AFP) during elections.

“Allegations regarding the involvement of certain members of the AFP affecting the results of elections have been plaguing this country and reached its pinnacle sometime in June 2005 when the so-called ‘Hello, Garci Scandal’ broke out,” said Pimentel, who also sponsored the measure.

The bill, he said, aims to limit the role of the AFP during the elections to “only maintaining peace and order” when there are “no available units or members of the Philippine National Police” in the area or when there is a need to augment the PNP units in a certain area.

Pimentel said the AFP can keep peace by manning checkpoints going into highways and running after private armed groups to ensure that people will be allowed to vote.

Under the bill, the senator said the AFP is prohibited from involving in activities related to handling and opening of ballot boxes, counting, tallying, and canvassing of votes, and proclamation of winning candidates during any electoral exercise.

“Basically, the bill says that the AFP should maintain a no touch policy over ballots, ballot boxes and election paraphernalia,” Pimentel said.

“In past elections, both local and national, reports of armed violence, coercion, ballot snatching, and acts of terrorism directed at voters and supporters of candidates, particularly in the remote areas, have become rampant. The guarantee of a clean, honest and orderly election is essential in any democracy,” he further said.