SAF: Rising from the fields of Mamasapano

ZAMBOANGA CITY — Inside the quarters which PO2 Jose Buncag once shared with the troopers who died in the ill-fated Mamasapano operation, he could sometimes smell his comrades.

A year has passed since the bloody clash but the members of 55th and 84th Special Action Companies (SAC) are very much alive in the memories of their brothers in uniform, with some claiming to sense their presence.

Buncag recalled that on the night of January 23 last year, they had talked for a few minutes before 36 members of the company headed to Kidapawan City to prepare for their jump off to Mamasapano, Maguindanao.

The months of training the troopers underwent didn’t give them enough confidence to carry out the high-risk mission. Both of them knew something was amiss.

It turns out their instincts were right. The 55th SAC lost more than half of its strength of about 70 men to the bloodbath. 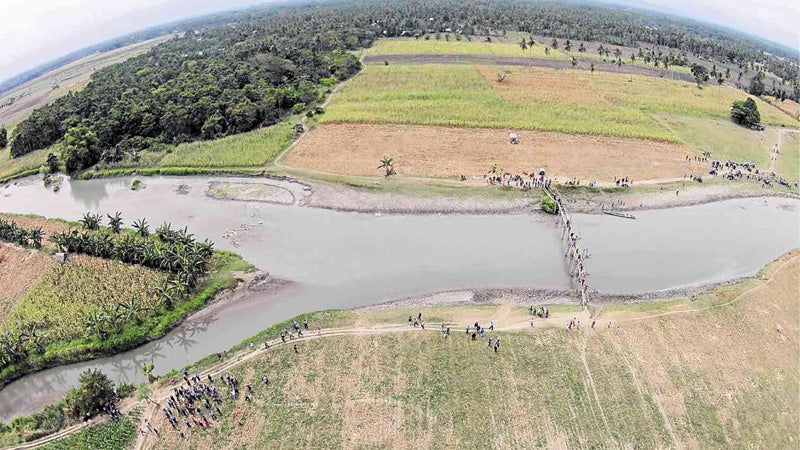 BIRD’S EYE VIEW OF KILLING FIELD The flat cornfields of Mamasapano town in Maguindanao province, where 44 commandos of the Philippine National Police Special Action Force were pinned down and killed on Jan. 25 in clashes with Moro rebels, as seen from a hovering drone. REM ZAMORA/INQUIRER FILE PHOTO

Only PO2 Christopher Lalan came back alive while the rest of his mates were pinned down in a cornfield in Barangay (village) Tukanalipao due to a heavy gunfight with members of Bangsamoro Islamic Freedom Fighters and Moro Islamic Liberation Front.

Some of the slain commandos, mostly from the 55th SAC, were mutilated, given deathblows in close range and stripped of their battle gear, firearms and clothes.

The death of 44 elite police commandos in the “Oplan Exodus,” or the mission against international terrorist Zulkifli Bin Hir or “Marwan” shocked the nation.

What was supposed to be a flawless operation turned out to be the single deadliest raid in the history of SAF and the Philippine National Police.

Director Moro Virgilio Lazo choked up when INQUIRER.net asked him in an interview how the Mamasapano incident affected him on a personal level.

“Just right now my voice is cracking and we’re just talking about them. I really feel sorry for them. Sana hindi ito nangyari. I still cry when I think of them,” said Lazo as he reached for tissue to wipe his eyes.

“That’s the essence of their brotherhood and that’s what most people do not understand.”

“You saw their living conditions in the camp, right? You can’t help but tell yourself, ‘Ganito ba ang elite na SAF?’ Pero makikita mo masaya sila. How can you not sympathize with them?”

INQUIRER.net documented the lives of SAF troopers in camps in the regions of SOCCSKSARGEN and Autonomous Region in Muslim Mindanao.

One year after the tragedy, the counter-terrorism and counter-insurgency unit is slowly getting back on its feet.

And the incident did not discourage SAF in launching important operations. Instead, it raised its standards in fulfilling missions and strived to surpass public expectations.

When he assumed the SAF leadership more than a month after Mamasapano, Lazo would tell his men to emulate the heroism of their 44 comrades.

“You saw their living conditions in the camp, right? You can’t help but tell yourself, ‘Ganito ba ang elite na SAF?’ Pero makikita mo masaya sila. How can you not sympathize with them?”

Lazo said the SAF remained aggressive in pursuing terrorists threatening the public, but this time it was “more cautious” in carrying out sensitive missions.

After the controversial operation, the SAF has become more meticulous in reviewing protocols and ensuring that all details essential in an operation have been taught to the troopers during their training.

But he stressed that the SAF will not let caution turn into cowardice.

Like what the planners of Oplan Exodus stressed, Lazo said the “SAF 44” were all ready to die for their country.

Even before a recruit joins the SAF, which Lazo calls the “soldiers of the police force,” he already accepts the fact that he would be offering his life for the country.

“And so, once na naaaccept na niya ‘yung fate niya na handa siyang mamatay para sa bayan, everything else will follow, he will accept the training, the hardships in the deployment, the days na absent siya sa pamilya at loved ones niya, the comforts in life na normally gusto natin talagang nawawala,” he said.

“That’s the special attitude of a SAF trooper.”