Storm-hit US digs out as death toll rises to 22 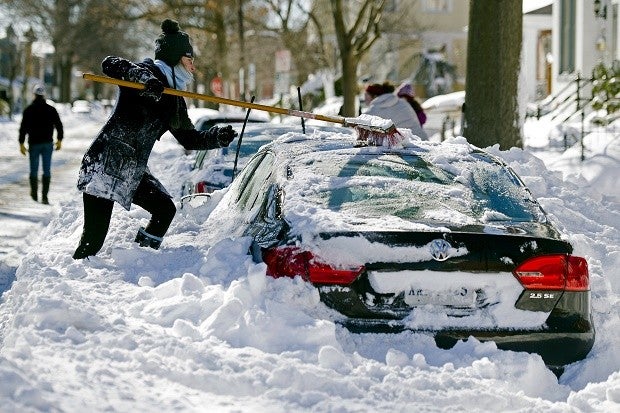 Rhianna McCarte, 30, clears snow from her car, before digging it out, in Alexandria, Virginia, Sunday, Jan. 24, 2016. Millions of Americans were preparing to dig themselves out Sunday after a mammoth blizzard with hurricane-force winds and record-setting snowfall brought much of the East Coast to an icy standstill. AP

NEW YORK, United States — The eastern United States dug out Sunday from an historic blizzard that killed at least 22 people, but as New York slowly lumbered back to life in preparation for the work week, major travel disruptions persisted in Washington.

The storm — dubbed “Snowzilla” — walloped a dozen states from Friday into early Sunday, affecting an estimated 85 million residents who were told to stay indoors and off the roads for their own safety.

The 26.8 inches (68 centimeters) of snow that fell in New York’s Central Park was the second-highest accumulation in the city since records began in 1869, and more than 22 inches paralyzed the capital Washington.

Near-record-breaking snowfall was recorded in other cities up and down the East Coast, with Philadelphia and Baltimore also on the receiving end of some of the worst that Mother Nature could fling at them.

But as the storm ended and temperatures rose Sunday, New York emerged from a total shutdown with a travel ban lifted. Roads were reopened throughout the city, on Long Island and in New Jersey.

Thousands of people flocked to parks, tobogganing, organizing snowball fights and strapping on cross-country skis, as children delighted in a winter wonderland under glorious sunshine.

But as the death toll from storm-related deaths rose, authorities advised caution despite the picture postcard scenes outside.

“We urge all New Yorkers not to travel on our roads except when necessary, and to be extremely careful when driving,” New York Mayor Bill de Blasio told a news conference.

“Our tireless sanitation workers are out in full force and we must give them space to clear the roads. If you go outside, use caution and stay alert for ice and cold temperatures,” he added.

Broadway resumed shows, which were canceled on Saturday, and museums reopened in New York, as snow plows quickly cleared the main avenues and temperatures hovered at about 32 degrees Fahrenheit (zero Celsius).

Jessica Edwards, a filmmaker from Canada, joined in the fun, pulling four-year-old daughter Hazel down a hill in a sled in a New York park.

“Oh my God, she’s so excited — we left the house this morning and we packed a bunch of stuff to make a snowman,” she told AFP.

“After being locked in for a couple of days, it’s fun,” said 33-year-old participant Laura Lorenzo.

The fatalities occurred in Arkansas, Delaware, Kentucky, Maryland, New York, North Carolina, Ohio and Virginia, while hundreds of thousands were left without power at the height of the storm.

Despite the rising temperatures, thousands of air passengers remained stranded, and in Washington, public schools were to remain closed and only limited public transport to resume Monday.

Nearly 3,500 domestic and international flights were canceled on Sunday, FlightAware said, with Reagan National and Dulles International airports in the US capital to remain closed Sunday.

Washington’s public transit system announced that limited rail and bus service would resume on Monday, and said Metro fares would be waived as trains would begin running only every 20-25 minutes.

The House of Representatives opted to remain out of session for the coming week due to the severity of the winter storm — with no votes set until February 1.

In New York, De Blasio called for extra emergency snow laborers to come forward to remove snow and ice from bus stops, crosswalks and fire hydrants for pay starting at $13.50 an hour.

“This was one of the worst storms to ever hit New York City and we need all hands on deck to dig us out,” he said.

“People want to start to go outside and start shoveling and clearing their walks and driveways,” said New Jersey Governor Chris Christie, a Republican presidential contender who left the campaign trail to oversee the emergency response in his state.

“This is very heavy snow so I ask that they please be careful as they clean up their own property today or their businesses.”

Many of the storm-related deaths were people who suffered heart attacks while shoveling.

Nearly 150,000 power outages were reported in North Carolina alone at the height of the storm, emergency officials said. On Sunday, that number had been whittled down to about 50,000.

Snow and sleet even buffeted the southern state of Tennessee — unusual for the region.