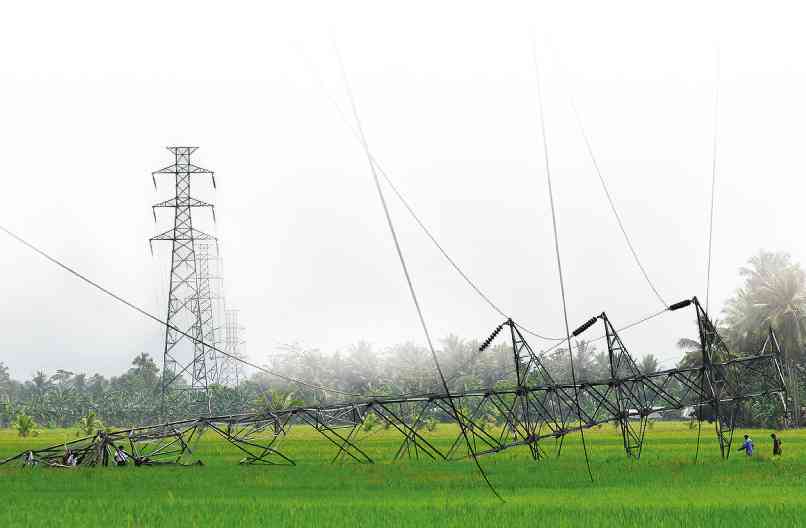 THE BOMBING of transmission towers has succeeded in toppling this tower in September 2013 in North Cotabato province, causing massive outages there and in two other provinces—Sultan Kudarat and Maguindanao. CONTRIBUTED PHOTO

ROTATING four- to eight-hour brownouts that could spell an election failure in May have prompted calls for a congressional inquiry into the recent bombings of power transmission towers in Mindanao.

Two Mindanao lawmakers have filed a resolution asking the House energy committee to compel the Armed Forces of the Philippines and the Philippine National Police to explain what they were doing to prevent the bombings.

Earlier this month, National Grid Corp. of the Philippines (NGCP) declared a red alert in Mindanao as power reserves dropped to zero due to the isolation of the National Power Corporation-owned generating facilities Agus 1 and 2 hydropower plants.

The Agus 1 and 2 hydro facilities are connected to the grid through the Agus 2-Kibawe 138kV line in Ramain, Lanao del Sur, which NGCP has failed to restore due to conflicts with land owners.

The Rodriguez brothers also noted that the AFP and the PNP had yet to capture those responsible for the bombings “despite the long period of time that passed since the latest bombings, and worse, it seems that they had not elaborated yet on the motive of the bombings.”

“If these bombings continue, Cagayan de Oro City and the entire Mindanao will suffer devastating brownouts,” the authors said.

They lamented that parts of Mindanao were experiencing rotating brownouts ranging from 4 to 8 hours every day as a result of the attacks, which had been blamed either on landowners demanding payment from the government or Moro insurgents.

Rufus Rodriguez warned last week that failure to stop the bombings could doom the elections in Mindanao.

There are almost 13 million registered voters from the six regions of Mindanao, comprising 23 percent of the Philippine voting population of 54.4 million.

“If we are unable to stop bombings and repair the towers, we are not only talking about coming brownouts, the entire environment and voting precincts will go dark, and only the PCOS (precinct counting optical scan) machines will have batteries,” Rodriguez said last week.

“There is a real possibility of a Mindanao-wide failure of elections,” he told the panel chaired by Oriental Mindoro Rep. Reynaldo Umali.