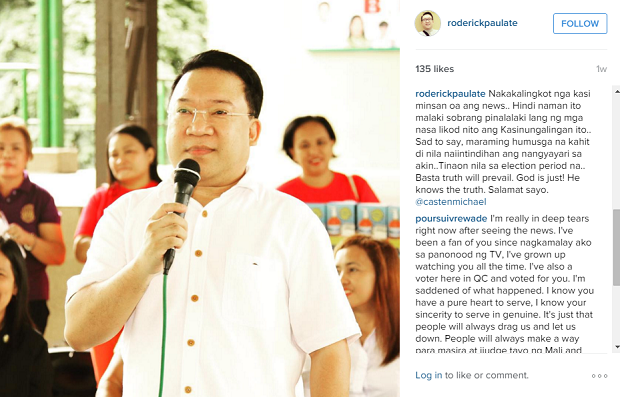 Former actor and Quezon City councilor Roderick Paulate has belied the accusations against him after the Ombudsman ordered his dismissal from public service over ghost employees in the city council’s payroll.

In a comment on one of his Instagram posts, Paulate said he was saddened by the Ombudsman’s decision, adding that news reports regarding his sacking was quite exaggerated.

(It saddens me because sometimes, news stories or exaggerated. The issue is not a huge one but it those behind this lie made a big deal out of it.)

(Sad to say, many were quick to judge although they don’t understand what is happening to me. They made sure that the issue will coincide with the election period. Truth will prevail God is just! He knows the truth.)

The two officials were meted with perpetual disqualification from office, cancelation of eligibility and forfeiture of retirement benefits.

The Ombudsman said Paulate had 30 ghost employees from July to November 2010, who supposedly received P2,500 to P5,000 monthly salary each. RAM