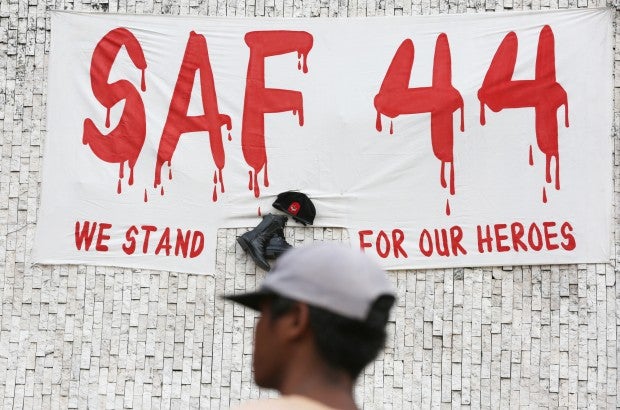 Malacañang on Saturday confirmed that President Benigno Aquino III himself would lead the awarding ceremonies to recognize as heroes the 44 troopers of the Philippine National Police’s Special Action Force (PNP-SAF) who lost their lives in the Mamasapano operation last year.

“This is the awarding ceremony that will take place, I believe, in Camp Crame. The President authorized the award and among the awards that will be conferred ay ang tinatawag na (is called) Medalya ng Kagitingan or the PNP Medal of Valor,” Quezon said over state-run Radyo ng Bayan.

Aquino earned the ire of the public for his supposed aloofness toward the Mamasapano fiasco, particularly due to his absence during the arrival of the troopers’ remains in Villamor Airbase, while he attended the inauguration of an automobile company.

The Medal of Valor, the highest military award in the country, will be conferred on Chief Insp. Gednat G. Tabdi and PO2 Romeo C. Cempron.

Tabdi was the head of the SAF 84th company, which led the “main effort” in the operation to capture international terrorist Zulkifi Bin Hir alias “Marwan,” while Cempron was the lead gunner of the 55th company.

“My understanding is that besides the awarding of the PNP Medal of Valor, which will be (given) to two individuals, there will also be the Medalya ng Kabahayanihan or the PNP Distinguished Conduct Medal, which will be awarded to the SAF 44,” he said. CDG

Enrile has good hands on Aquino

Read Next
Mammoth ‘Snowzilla’ blizzard blankets Washington
EDITORS' PICK
House energy committee chair Arroyo bats for cheap electricity
PH detects local transmission of Omicron subvariant BA.2.12.1
OVP: Pilot’s claim vs Robredo ‘never happened’, a ‘malicious fabrication’
Honolulu Café is the cure for your Egg Tarts and Roastings cravings
Petition to reverse Comelec decision on Bongbong Marcos’ DQ case reaches SC
Luxe property: A way to build, preserve wealth
MOST READ
Heart Evangelista gets a ‘no’ from Chiz Escudero after asking, ‘Do I deserve a bag?’
Congress canvassing of votes for president, VP to begin May 24
Man posing as Marcos spox revealed to be an inmate in Bilibid — Guevarra
Marcos DQ petitioners told: ‘Learn to respect will of the Filipino people’
Don't miss out on the latest news and information.