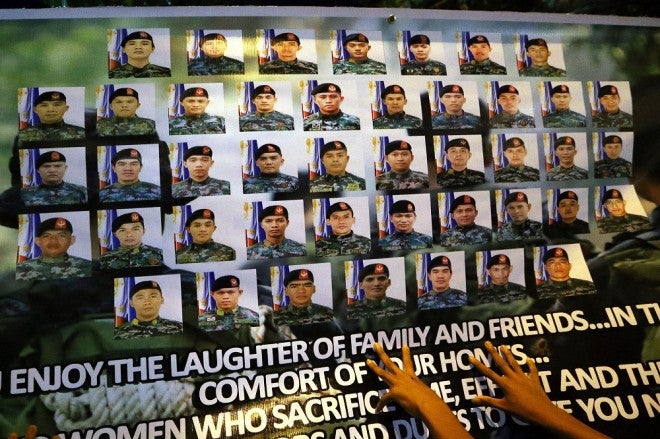 THE 44 SPECIAL Action Force (SAF) troopers who gave their lives last year in the operation to capture international terrorist Zulkifli Bin Hir alias “Marwan” are finally set to be officially recognized as heroes.

On the anniversary of “Oplan Exodus” operation in Mamasapano, Maguindanao, the slain elite policemen are expected to be posthumously conferred the two highest military awards in the country: the Medal of Valor (Medalya ng Kagitingan), and the Distinguished Conduct Medal (Medalya ng Kabayanihan).

“We have been, for some weeks now, planning to do an awarding ceremony on Monday (Jan. 25). I felt that it’s a fitting moment for our troops to finally be awarded appropriately,” PNP Director General Ricardo Marquez said Monday at the PNP headquarters in Camp Crame, Quezon City.

The National Police Commission (Napolcom) earlier announced the conferment of the Distinguished Conduct Medal award on 42 troopers of the SAF 44, as well as Supt. Raymund A. Train, the team leader of “Oplan Exodus.”

The Napolcom also announced last week that it had recommended to President Aquino the posthumous conferment of the highest military award, the Medal of Valor, to Chief Insp. Gednat G. Tabdi and PO2 Romeo C. Cempron of the SAF 44.

“We are waiting [for it], but I think it is in the final phase of being approved. So, hopefully, it will be approved so we can award them simultaneously,” Marquez said.

Tabdi was the team leader of the SAF 84th company, which took the “main effort” in the operation to capture Marwan. Cempron was the lead gunner of the 55th company. There was only one survivor from the 55th company, when it got caught in a firefight with Moro fighters who were holding the territory.

“The Napolcom takes cognizance of the outstanding accomplishments of these SAF troopers. These heroes will always be remembered and their sacrifice will never be forgotten. The SAF 44 did not die in vain, but showed the highest form of sacrifice for our safety and for our country,” Napolcom executive officer Eduardo Escueta said in a statement.

Escueta said the qualified children of the awardees will be granted scholarships. Medal of Valor awardees, or their surviving spouse and children, are also entitled to a lifetime monthly pension of P20,000.