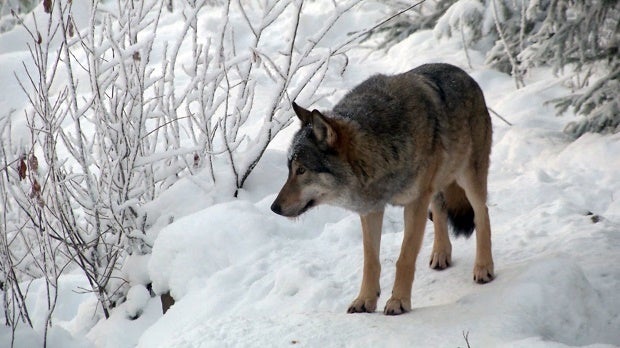 In this image made from video taken on Monday, Dec. 14, 2015, a wolf walks through the snow at a wolf enclosure in Ranua Wildlife Park in Ranua, Finland. Finnish authorities say a second, government-sanctioned trial wolf hunt is set to begin Saturday in an attempt to manage numbers and curb poaching. Finland’s state Wildlife Agency says 46 licenses have been given out for the hunting period that ends Feb. 21. The agency said Friday, Jan. 22, 2016 17 that wolves were killed in 2015, the first year of the trial cull. AP Video via AP

HELSINKI, Finland—Finland on Saturday kicks off a controversial wolf cull that gives hunters the right to kill around one fifth of the endangered animals, in a decision that has angered environmentalists.

Authorities hope the trial cull of 46 of Finland’s estimated 250 grey wolves will curb illegal poaching, which some rural landowners have resorted to in recent years after seeing wolves roaming their property, sometimes killing dogs and livestock.

“We wish to gain experience (to see) if this could be one solution to the conflict around wolves,” Sauli Harkonen, a director tasked with hunting administration at the Finnish Wildlife Agency, told AFP.

Quotas have been issued for specific regions, and the month-long cull will be carried out by licensed hunters.

Finland launched the first of a two-year trial in 2015 in a bid to address the deep rift between animal rights activists and those who want to see wolf numbers cut.

Hunters were given the green light to take out 24 wolves last year, though only 17 were killed.

That was the first time culls had been authorised since 2007, after the European Commission accused Finland of breaching EU protection rules on the endangered species, resulting in widespread poaching.

The conflict peaked in 2013 when a group of angry locals in the rural western municipality of Perho took the law into their own hands and killed three wolves. Twelve men were prosecuted and eventually found guilty.

Poachers throughout the country’s vast and remote forests reduced the total wolf population to between 120 and 135 animals in 2013, but numbers have since rebounded to around 250, similar to 2007 levels.

“The cull reduces the population but the wolf is a prolific species… Wolves have spread out to new and even somewhat populous areas,” Harkonen insisted.

Some Finns house a deep-rooted aversion and fear of the animal, dating back to the 19th century, when tales of wolves eating children were rife and rewards were paid to anyone who killed a wolf.

Rural residents regularly express concern for the safety of their dogs and livestock, while some even claim their children are in danger, though there have been no reported attacks on people in modern times.

Local residents in Perho claim there are still between 10 to 20 wolves in the area—a figure they deem too high.

But environmentalists worry that the cull may destroy the genetic diversity of the wolves.

“All protectionists have been shocked by the high quotas… The population should be at least twice as big for it to be genetically healthy,” said Mari Nyyssola-Kiisla, head of the wolf action group of the Finnish Nature League.

Authorities have advised hunters to target young wolves in order to prevent a dispersion of the packs, who follow their alpha leaders.

Despite that, at least one alpha female and three wolves with research collars were shot during last year’s cull.

Nyyssola-Kiisla feared the estimates of the population’s recent recovery could be exaggerated, as the official tally was hampered by an exceptionally warm early winter and the lack of snow made tracking difficult.

“The estimated number of packs is rather conservative since tracking wolves was very demanding towards the end of the year due to lack of snow,” the association wrote in a statement, pointing out that landowners’ reported wolf sightings had tripled between 2013 and 2015.

The trial hunt does not apply to reindeer areas in the north of the country, where wolves are known to attack the herds.

In those regions, herders can only hunt wolves that have been proven to have attacked their reindeer with special permits, valid for 21 days.

Hunting is a deep-rooted, widespread tradition and hobby in Finland, with around 300,000 people registering annually for permits, one of the highest per capita rates in Europe. Elk, hare, deer and wild birds are commonly hunted.