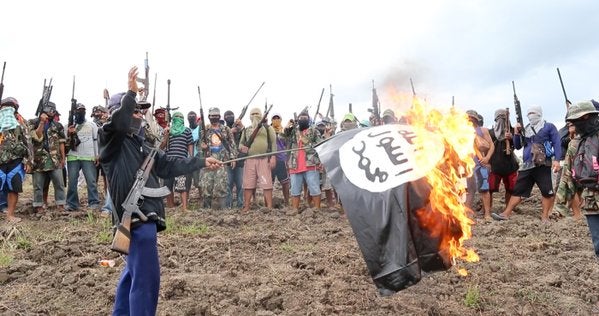 COTABATO CITY — The Bangsamoro Islamic Freedom Fighters on Friday said it believes that the military was behind the existence of the so-called Red God’s Army, an armed group involving Christians in Central Mindanao.

However, a military spokesperson shrugged off the allegation and said it would not think twice to take action against the Christian militia group if
it determined their location.

Abu Misri Mama, spokesperson of the BIFF, told the Inquirer that based on photos he saw, the firearms that the Red God’s Army members carry possibly came from the military.

But despite the “sophisticated weapons” that members of the Christian militia possess, Mama said the BIFF was not afraid of them.

Mama said the BIFF was not even afraid of the military, which has more advanced firepower.

“The military has tanks and sophisticated weapons too and yet we managed to sustain our campaign against soldiers,” he added.

Earlier, Brother Asiong, the spokesperson of the Christian militia group, admitted that authorities – including the military – knew about their
existence.

“They are aware of our existence,” he said.

But Asiong clarified that their group was not a military creation and was borne out of necessity to defend their communities from the atrocities of
the BIFF. Last year, at least 11 civilians were killed when BIFF gunmen stormed several villages in Maguindanao and Sultan Kudarat.

He admitted though that “there were several instances when we provided the military information on the whereabouts of lawless elements.”

Capt. Jo-ann Petinglay, spokesperson for the military’s 6th Division based in Maguindanao, told the Inquirer that the military regards Asiong’s group
as another lawless group similar to the BIFF.

“If we learn of their location, they will be subjected to the law and will be arrested,” she said.

As to the alleged support the Red God’s Army was getting from the military, Petinglay has categorically denied it.

“If there are personalities from our ranks behind them, we will investigate. We will not tolerate this that and we will file appropriate
charges against them,” Petinglay said.

Maguindanao Gov. Esmael Mangudadatu said nobody was allowed to carry guns in the province unless authorized.

“They could face arrest. Remember that a state of emergency is still in effect and we have the current gun ban,” Mangudadatu said, referring to
Proclamation Order No. 1946, which then President Gloria Arroyo had issued following the gruesome Maguindanao massacre, and of the gun ban in relation to the May polls.

Reacting to threats of being arrested, Asiong said the government should instead focus on running after the BIFF.

He also continued to justify the need for members of his group to bear arms.

“Can they (authorities) always provide us protection? If we don’t have guns of our own, we are all going to die in the hands of our enemies,” Asiong
said by phone.