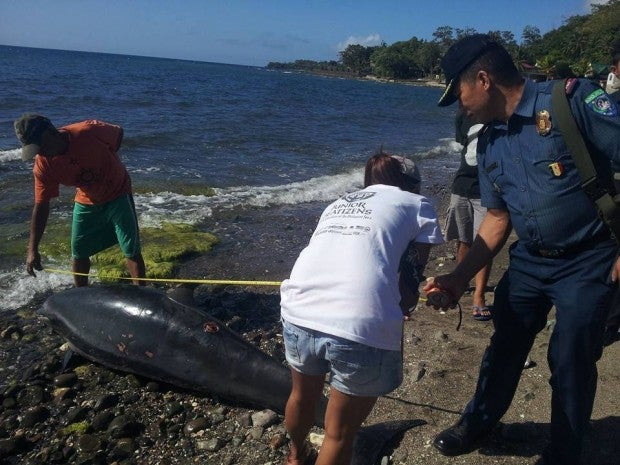 Staff of Jagna Municipal Agriculture Office and the Jagna Police Station responded to the reported incident of a dolphin which was found dead at the sea shore in barangay Pangdan in Jagna town, Bohol. Contributed Photo/Jagna Police Station

TAGBILARAN CITY—Residents of a coastal village in Jagna town, Bohol found a dead juvenile dolphin that was washed ashore.

Justiniana Ayuban-Ocmeja, a staff of Municipal Agriculture Office in Jagna, said they found a three-inch wound near the dorsal fin of the Bottlenose dolphin on Friday morning.

But she added a necropsy would be conducted at the Marine Education Center in Barangay Paseo del Mar to determine the cause of death.

The dolphin, which weighed 50 kilos and was 2.2 meters long, was first spotted floating a few meters from the shore of Barangay Pangdan in Jagna about 6 a.m. on Friday.

Residents immediately contacted the Jagna police station and the MAO.

Donna Galagala of MAO said dolphins often spotted at Jagna seas since the area is known as nesting place of dolphins and playing calves.

“We have lots of dolphins here so boatmen are advised to be extra careful so as not to hit the creatures with their boat propellers,” she said.

Jagna town is known for its resorts, beaches and tourist attractions. Fishing is also a livelihood for many coastal villages.

According to Physalus, a non-profit organization founded in Italy and is operating a Marine Education Center in Jagna town, the province is home to 18 out of the 26 species of marine mammals in the Philippines, the highest biodiversity of cetaceans in Asia.

In order to protect the marine animals, a Dolphin Festival was held in 2012. CDG