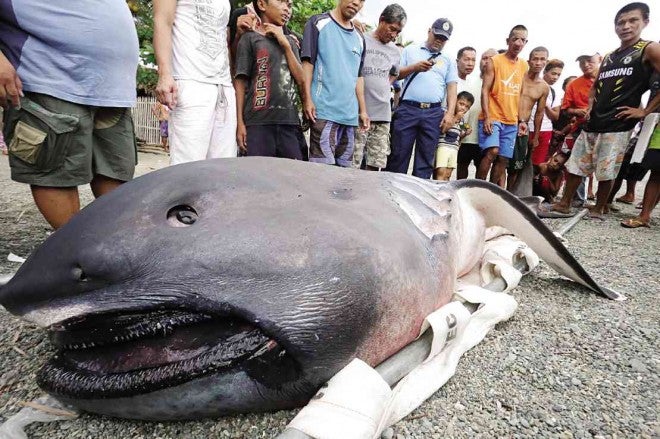 The megamouth shark, weighing about a ton, was found dead on the shore of Barangay Marigondon in Pio Duran town in Albay. MARK ALVIC ESPLANA/INQUIRER SOUTHERN LUZON

LEGAZPI CITY—The Bureau of Fisheries and Aquatic Resources (BFAR) gave the name “Toothless” to the 15-foot megamouth shark that was found dead on the shore of Barangay Marigondon in Pio Duran town in Albay province on Wednesday.

Toothless, now stored in an ice plant, would be preserved and later displayed at the Albay Park and Wildlife in this city, according to Nonie Enolva, head of the BFAR-Regional Emergency Stranding Response Team in Bicol.

Enolva said the shark was named after a character in “Gift of the Night Fury,” a computer-animated short film by DreamWorks Animation released in 2011.

“That male shark really looks like Toothless. (By giving it a) name, we can identify it, especially when incorporating it to the record of BFAR,” she said.

Enolva said the necropsy of the rare species would be undertaken by an expert who was expected to arrive from the United States sometime next week.

Enolva earlier said BFAR planned to preserve the shark through taxidermy, the process of removing all organs of the specimen, soaking its skin in formalin and stuffing it for museum display.

She said BFAR officials are waiting for the completion of a specialized aquarium where Toothless would be displayed.

The male shark is at least 2.1- meters wide and with an estimated weight of 1,000 kilogram, bigger than what had been recovered in Cagayan de Oro City which weighed 500 kg and was shorter, she said.

Enolva confirmed that Discovery Channel, a global mass media and entertainment company based in Silver Spring, Maryland, has shown interest in filming the necropsy and preservation process on the deep water shark.

BFAR authorities are still trying to find out how the shark ended up in the waters off Pio Duran, although Enolva said it was possible that it might have gotten entangled with a fishing net. The shark was found with wounds and its tail was missing.