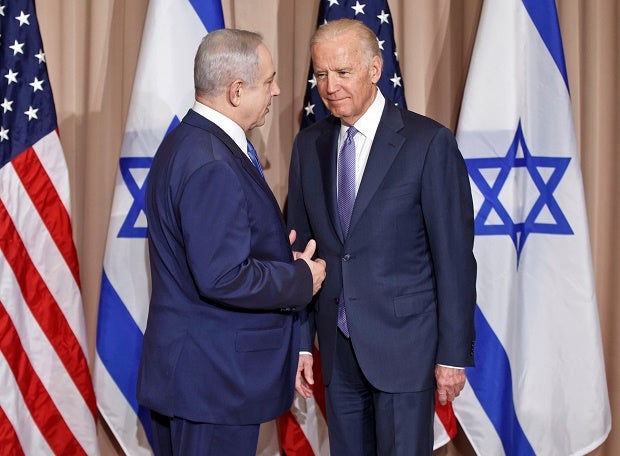 Israeli Prime Minister Benjamin Netanyahu, left, and US Vice-President Joe Biden pose for the media prior to a meeting on the sidelines of the World Economic Forum in Davos, Switzerland, Thursday, Jan. 21, 2016. The meeting comes less than a week after a diplomatic breakthrough between the U.S. and Iran that has put Israel’s government on edge. AP Photo

“We have made it very clear that we use sanctions when we think they are appropriate in order to counter behavior that we believe has broken the law or has challenged the United Nations Security Council or threatened the United States,” Kerry said on the sidelines of a gathering of billionaires and political leaders in the Swiss ski resort of Davos.

“We stand by our sanctions,” Kerry said.

“We think they have been used judiciously and effectively and we are looking to move on now to put to test the willingness of Iran and other countries in the region to try to reduce tensions and move in a different direction.”

Iranian Foreign Minister Mohammad Javad Zarif, who was also in Davos, criticized the US decision on missile-related sanctions.

“I find it rather bizarre that the United States expresses concern over the Iranian missile program, which is defensive and does not violate any current international regulation,” Zarif told an audience of bankers and top business figures on Wednesday.

“We are entitled to our defense. We are spending a fraction of what our neighbors spend on defense, so what’s all this fuss about? I can’t understand.”

The US Treasury said Sunday it was imposing sanctions on five Iranian nationals and a network of companies based in the United Arab Emirates and China in connection with Iran’s ballistic missile program.