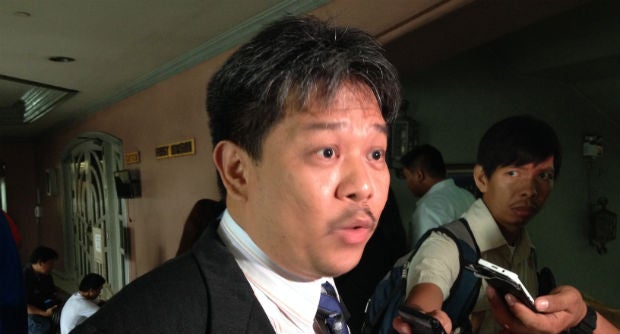 The Sandiganbayan on Thursday scolded the lawyer of Janet Lim-Napoles for complaining that the court was giving special treatment to the plunder trial of the accused pork barrel scam mastermind.

During the plunder trial before the antigraft court third division, Presiding Justice Amparo Cabotaje-Tang scolded in open court Stephen David for accusing the Sandiganbayan of giving undue haste on the case.

Before the trial started, Tang gave David a dressing-down.

The presiding justice said the court had every right to require the attendance of the accused for the trial proper.

“The court wants to be clarified on your claims yesterday on alleged violation of your right to people’s protection, as well as your complaint on the requirement for the presence of Napoles. (The court) has every right to require any accused to be present,” Tang said.

In an interview on the first day of the trial on Wednesday, David said the court seemed to give special favor to the plunder trial of Napoles and Jessica Lucila “Gigi” Reyes by giving it half-day sessions twice a week.

The Third Division has set the plunder trial twice a week every Wednesday and Thursday.

The court seemed to be giving preference to the pork barrel scam trial over other cases of equal importance, which were usually conducted simultaneous with other trial proceedings, David said.

David also said the court ordered Napoles’ appearance even though she had requested to waive her appearance in the plunder trial.

David said Napoles wanted to waive her appearance in court due to the security risks of traveling to the Sandiganbayan from the Correctional Institution for Women in Mandaluyong City, where Napoles is sentenced to life in prison for the serious illegal detention of principal witness Benhur Luy.

Containing her voice, an angry Tang scolded David for accusing the court of giving undue haste to the case.

“The court is asking you to be more responsible. The court is lenient to all parties. The court does not want to be unduly accused of anything,” Tang said.

David answered that he did not intend to offend the court, but he was merely protecting his client in the case.

After the hearing, David said he had done no wrong for him to apologize, but he was sorry for offending the court unintentionally.

Napoles and Reyes are being tried for plunder in the case of Sen. Juan Ponce Enrile, who is out on bail.

Enrile’s plunder trial was deferred pending the Supreme Court’s decision on the appeal of the Ombudsman against the high court’s grant of bail to Enrile on humanitarian grounds. Enrile was under hospital detention before he was allowed bail.

Enrile is accused of receiving P172.8 million in kickbacks from Napoles through his alleged agents Ruby Tuason and Reyes.

The senator is out on bail from hospital detention after the Supreme Court considered his petition citing his advanced age and political stature.

While Enrile is granted bail, Reyes is detained at the female dormitory of the Camp Bagong Diwa in Taguig City pending her plunder trial.

In denying bail for Napoles and Reyes, the Sandiganbayan in its resolution had taken credence in witness Tuason’s testimony and said Reyes received the kickbacks from Napoles even though there was still no evidence Enrile directly benefited from it.

Tuason is the self-confessed agent of Enrile who allegedly met up with Reyes to deliver the senator’s kickbacks.

Estrada and Revilla are detained at the Philippine National Police Custodial Center, while Lañete and Valdez are incarcerated at the Camp Bagong Diwa.