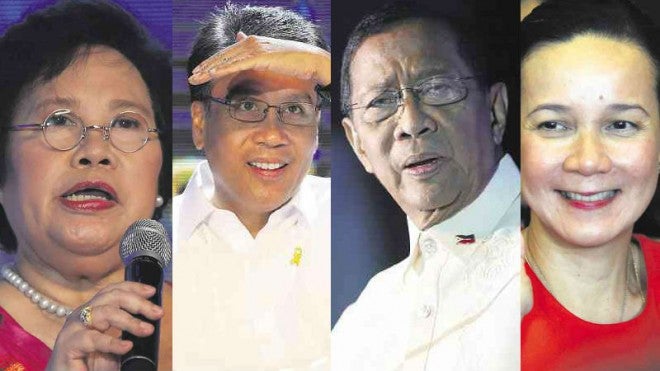 The camps of presidential aspirants Senator Miriam Defensor-Santiago, Mar Roxas, Vice President Jejomar Binay and Senator Grace Poe have committed to participate in the debates organized by the Comelec and media organizations. Roy Señeres has also made his commitment, while the camp of Davao City Mayor Rodrigo Duterte is still convincing him to attend. FILE PHOTOS

At least five presidential aspirants for the May elections have confirmed to participate in a series of debates organized by major media networks and the Commission of Elections.

Lawyer Antonio Kho of the camp of Davao City Mayor Rodrigo Duterte said he will “highly recommend” the participation of their presidential candidate.

The first debate, organized by Inquirer and GMA Network, will be held at Capitol University in Cagayan de Oro on February 21.

He said it was good that the candidates will be attending the debates in different parts of the country to touch base with the voters.

Asked about the possibility of the politicians backing out, Bautista said, “I think it is to their disadvantage if they do not attend.”

“Ito ay isang malaking pagkakataon para sa mga candidate na makausap ang sambayanan. Libre pa man din (This is a huge opportunity for our candidates to speak to the nation. And it’s free.),” he said. “I think also the voters might take it against them if they do not attend.”

Various concerns were discussed during the meeting, including political ads and crowd control.

Bautista said each candidate should be given equal “proportional allocation” for their supporters. The number of supporters allowed will depend on the venue chosen by the media partners.

While the Comelec chairperson said he did not want political advertisements shown during the televised debates, they would have to face the “commercial realities.” Media networks said they will have difficulty getting non-political advertisers for the program. Bautista said they will still have to set another meeting with the Kapisanan ng mga Brodkaster ng Pilipinas and the television stations.

He said they can opt to disallow the airing of presidential candidates’ commercials and allow that of other politicians.

Bautista said they were looking forward to sign a memorandum of agreement to bolster the commitments of the stakeholders.

After the February 21 debate hosted by Inquirer and GMA Network, three more debates will be held in March 20 (Visayas), April 10 (Metro Manila), and April 24 (Luzon).