Comelec to presidential, VP bets : Attend poll debates or else… 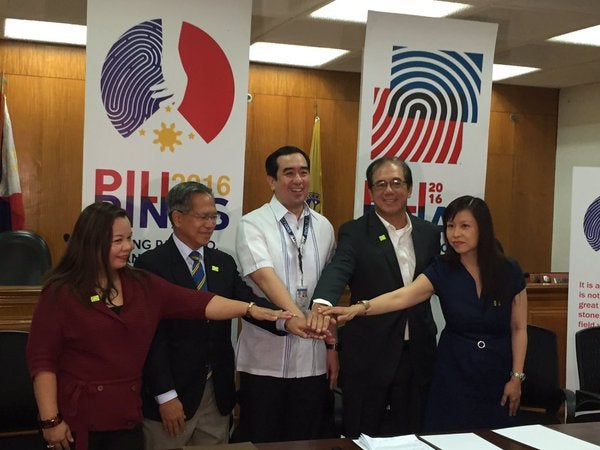 The Comelec in partnership with Philippine Daily Inquirer (represented by Central Desk chief Juliet Javellana (first from left)) and GMA 7 will hold a presidential debate in February at the Capitol University in Cagayan de Oro City. ARIES JOSEPH HEGINA/INQUIRER.net

The Commission on Elections (Comelec) urged presidential and vice presidential aspirants to attend the election debates it has organized, in cooperation with various media partners, or they would miss the opportunity to present their platforms and stance on pressing issues.

During the signing of the memorandum of agreement of the Comelec and various media outlets on Wednesday, Comelec chairman Andres “Andy” Bautista said that they would not force any candidates to attend the election debates.

“We are inviting all the candidates, all the official candidates for the presidency and vice presidency. We will all give them a seat in the debate,” Bautista said.

“I do not believe in compulsion. We believe in freedom. So they are free to attend or not to attend but they will certainly miss out a great opportunity to be able to speak to the Filipino people because these debates will be telecast in various media outlets all over the country,” he added.

Bautista said that in the event that a candidate would not show up, his or her chair will not be removed during the entire duration of the debate.

“If they do not show up, then their seat with their name will remain in the event,” he said.

The Comelec chairman said that a candidate’s absence in the debates “is a message in itself.”

“We don’t shame anybody. It is because not showing up is a message in itself,” he said.

The election debates will be conducted pursuant to Republic Act 9006 or the Fair Elections Act.

The Mindanao presidential debate will be held at the Capitol University in Cagayan de Oro City.

A vice presidential debate will be held in Metro Manila on April 10 which will be hosted by CNN Philippines, BusinessMirror and Rappler.

All debates will be conducted from 5 to 7 p.m.

Each presidential debate will tackle different topics: in the Mindanao leg, the issues which will be discussed include agriculture, poverty reduction, and Charter change; in Visayas, the debate will center on disaster preparedness, climate change adaptation, fighting corruption, healthcare and education; while the Luzon debate will touch on the traffic and transportation woes, electoral and political reforms, foreign policy, national defense and taxation. IDL