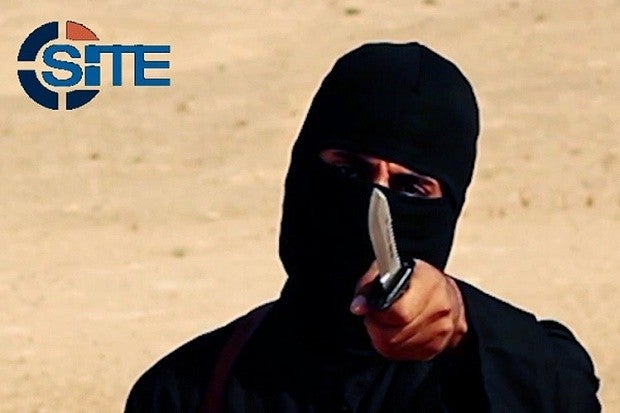 This image made from militant video, which has been verified by SITE Intelligence Group and is consistent with other AP reporting, shows Mohammed Emwazi, known as “Jihadi John,– who appeared in several videos depicting the beheadings of Western hostages. SITE, which tracks terrorist activity, says the Islamic State group is acknowledging the death of the masked militant and published a “eulogizing profile” of him on Tuesday, Jan. 19, 2016, in its English-language magazine Dabiq. AP

NEW YORK — The Islamic State group has acknowledged the death of the masked militant known as “Jihadi John,” who appeared in several videos depicting the beheadings of Western hostages, the SITE Intelligence Group reported Tuesday.

SITE, which monitors terrorist activity, reported that IS published a “eulogizing profile” of Jihadi John in its English-language magazine Dabiq on Tuesday. Jihadi John had been identified by the US military as Mohammed Emwazi, a Kuwaiti-born British citizen.

“His harshness towards the kuffar (disbelievers) was manifested through deeds that enraged all the nations, religions, and factions of kufr, the entire world bearing witness to this,” the Dabiq article said, according to a translation provided by SITE.

Army Col. Steve Warren, a US military spokesman, said in November that the Army was “reasonably certain” that a drone strike in Syria had killed Emwazi, who spoke in beheading videos with a British accent as he wielded a knife.

Separately, a US official said three drones — two US and one British — targeted the vehicle in which Emwazi was believed to be traveling in Raqqa, the capital of the Islamic State’s self-proclaimed caliphate in northern Syria. The official said the US drone fired a Hellfire missile that struck the vehicle.

Sotloff’s mother, Shirley Sotloff, told The Associated Press on Tuesday that she hadn’t heard about the IS announcement but assumed Emwazi was dead following the Army’s announcement last fall.

Jodi Perras, a spokeswoman for the Kassig family in Indianapolis, said they had no comment on the news about Jihadi John.

In the gruesome videos, a tall masked figure clad in black and speaking in a British accent typically began with a political rant taunting the West and a kneeling hostage clad in an orange prison-style jumpsuit before him, then ended it holding an oversize knife in his hand with the headless victim lying before him in the sand. The videos don’t make clear if he carried out the actual killings.

He also appeared as a narrator in videos of other beheadings, including the mass killing of captive Syrian government soldiers.

Emwazi was believed to be in his mid-20s when he was killed. He had been described by a former hostage as a psychopath who enjoyed threatening his Western captives.

Spanish journalist Javier Espinosa, who was held by the IS in Syria for more than six months after his abduction in September 2013, said Emwazi would explain precisely how the militants would carry out a beheading.

Emwazi was born in Kuwait and spent part of his childhood in the poor Taima area of Jahra before moving to Britain as a boy, according to news reports quoting Syrian activists who knew the family. He attended state schools in London, then studied computer science at the University of Westminster before leaving for Syria in 2013.