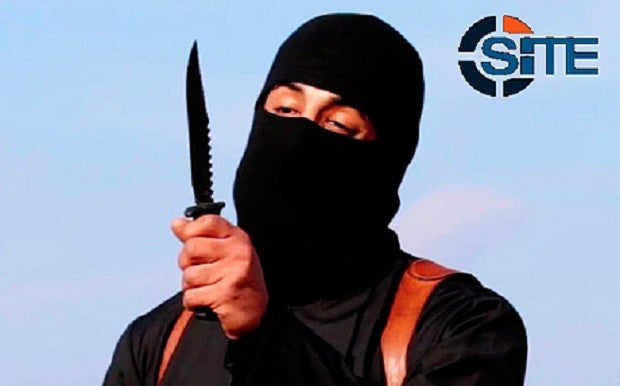 This image made from militant video, which has been verified by SITE Intel Group and is consistent with other AP reporting, shows Mohammed Emwazi , known as “Jihadi John,” holding a knife. A US drone strike targeted a vehicle in Syria believed to be transporting the masked Islamic State militant known as “Jihadi John” on Thursday, Nov. 12, 2015 according to American officials. Whether the strike killed the British man who appears in several videos depicting the beheadings of Western hostages was not known, officials said. AP

WASHINGTON — The US military is “reasonably certain” its drone strike in Syria killed the masked Islamic State militant known as “Jihadi John,” who appeared in several videos depicting the beheadings of Western hostages.

But families of the hostages brutally killed last year said his presumed death is little solace.

Army Col. Steve Warren, US military spokesman in Baghdad, told reporters Friday that officials had been following Mohammed Emwazi, a Kuwaiti-born British citizen, for some time.

“The intelligence indicators that we had gave us great confidence that this individual was Jihadi John and when the opportunity presented itself — with the opportunity for minimal civilian casualties — we took the shot,” Warren said. “This guy was a human animal, and killing him is probably making the world a little bit better place.”

Another US official told The Associated Press that three drones — two US and one British — targeted the vehicle in which Emwazi was believed to be traveling in Raqqa, the Islamic State’s self-proclaimed capital in northern Syria. The official, who was not authorized to speak publicly and requested anonymity, said the US drone, armed with a Hellfire missile, struck the vehicle.

READ: US airstrike targets ‘Jihadi John’ from IS slaying videos

Warren said that Emwazi and one of his friends were apparently killed, and there were no civilian casualties. Officials are using a variety of human and signals intelligence, social media reports and other methods to confirm Emwazi’s death. A Turkish official says authorities there have detained a man they suspect is linked to Emwazi. The man, who they strongly believe to be Aine Lesley Davis, was detained in Istanbul.

“His death does not bring Jim back. If only so much effort had been given to finding and rescuing Jim and the other hostages who were subsequently murdered by ISIS, they might be alive today,” they said.

Likewise, Art and Shirley Sotloff said the development “doesn’t change anything for us; it’s too little too late. Our son is never coming back.”

British Prime Minister David Cameron said the strike had been a joint effort to hit the British-accented militant, whom Cameron called the group’s “lead executioner.”

Cameron also said the strike had been “an act of self-defense … a strike at the heart” of the Islamic State group.

US Secretary of State John Kerry, appearing at a news conference in Tunis, Tunisia, declared that extremists “need to know this: Your days are numbered, and you will be defeated.”

The Britain-based Syrian Observatory for Human Rights said that US coalition warplanes struck an Islamic State vehicle as it left the governor’s office in Raqqa, Syria, killing four IS foreign fighters, including a British commander. The Observatory said the bodies were charred, and Observatory chief Rami Abdurrahman said the commander killed in the attack was most likely Emwazi.

If the strike did kill Emwazi, it would represent the latest in a string of significant Islamic State and Khorasan Group figures who have been tracked and killed in a joint effort by the CIA and the military’s Joint Special Operations Command.

Intelligence analysts and special operators have harnessed satellites, sensors, drones and other technology to track and kill elusive militants across a vast area of Syria and Iraq, a region where there is no significant US ground presence and where the targets are aware they can be found through their use of electronic devices.

The CIA began stepping up efforts to profile militants in Syria in early 2013. The tracking capacity improved as the Pentagon deployed 24-hour overhead coverage allowing the NSA to soak up electronic signals while the National Geospatial-Intelligence Agency (NGA) conducted visual surveillance, officials say. The CIA and Defense Intelligence Agency have stepped up efforts to recruit human sources.

Emwazi, believed to be in his mid-20s, has been described by a former hostage as a bloodthirsty psychopath who enjoyed threatening Western hostages. Spanish journalist Javier Espinosa, who was held in Syria for more than six months after his abduction in September 2013, said Emwazi would explain precisely how the militants would carry out a beheading.

Those being held by three British-sounding captors nicknamed the militants “the Beatles,” with “Jihadi John” a reference to John Lennon, Espinosa said.

In the videos, a tall masked figure clad in black and speaking in a British accent typically began one of the gruesome videos with a political rant and a kneeling hostage before him, then ended it holding an oversize knife in his hand with the headless victim lying before him in the sand.

Emwazi was identified as “Jihadi John” last February, although a lawyer who once represented Emwazi’s father told reporters that there was no evidence supporting the accusation. Experts and others later confirmed the identification.

Emwazi was born in Kuwait and spent part of his childhood in the poor Taima area of Jahra before moving to Britain as a boy, according to news reports quoting Syrian activists who knew the family. He attended state schools in London, then studied computer science at the University of Westminster before leaving for Syria in 2013.