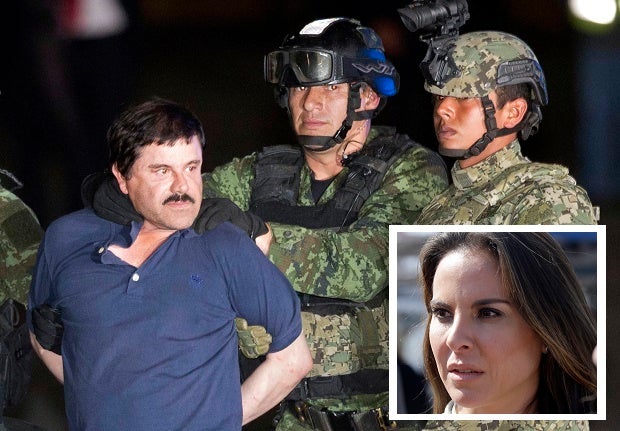 In this Friday, Jan. 8, 2016 photo, Joaquin “El Chapo” Guzman is made to face the press as he’s escorted to a helicopter in handcuffs by soldiers and marines at a federal hangar in Mexico City. INSET: In this March 24, 2013 file photo, Mexican actress Kate Del Castillo attends a NASCAR Sprint Cup auto race in Fontana, Calif. Del Castillo stepped out of the fictional drug-trafficker roles she played on TV and got involved in the real world of drug capos, after Sean Penn credited her with setting up a secret meeting with the world’s most-wanted drug lord Joaquin “El Chapo” Guzman. AP File Photos

The US-Mexican star has come under scrutiny since it was revealed last week that she exchanged affectionate text messages with Guzman and brokered a meeting between the Sinaloa drug cartel honcho and US actor Sean Penn.

An official at the attorney general’s office told AFP that the request for Del Castillo to testify as a witness was sent over the weekend.

Since Del Castillo lives in Los Angeles, Attorney General Arely Gomez told El Universal newspaper the actress could give her testimony to investigators at the Mexican consulate in the California city.

Officials told AFP last week that investigators wanted to speak to Penn and Del Castillo about their meeting with Guzman, but only the actress has been formally approached.

READ: Sean Penn: Nothing to hide over drug lord interview

El Universal published on Monday alleged text messages between Del Castillo and Guzman’s attorney, Andres Granados, in which they appeared to discuss the possibility of the drug lord investing in her tequila company, Honor Del Castillo.

A federal government official confirmed to AFP the authenticity of the text messages written in April and July, before Guzman escaped from prison on July 11.

Last week, another set of texts leaked to the media showed that Guzman and Del Castillo exchanged warm messages between September and November.

Del Castillo, 43, who is famous for her role as a drug lord in the TV show “Queen of the South,” wrote on Twitter last week that the reports about her “aren’t truthful.”

Guzman, 58, was recaptured in a military raid on January 8 in Guzman’s northwestern home state of Sinaloa.

Authorities say the discovery of Guzman’s meeting with the actors in October, subsequent military operations in his mountain stronghold and the drug lord’s desire to see Del Castillo again contributed to his arrest.

In the text messages published by El Universal on Monday, the lawyer allegedly tells the actress he wants to talk to Guzman about her tequila company.

“Who knows (maybe) he’s interested and you become partners,” the lawyer writes. The actress answers: “Incredible!!!”

Officials said last week that authorities were investigating the “actions” that took place during the meeting with Guzman, not people directly.

Alejandro Hope, a security analyst and former Mexican intelligence agency official, said prosecutors have to find evidence of a monetary transaction in order to charge someone of a financial crime.

Otherwise, Hope told AFP, “there is nothing, there is no crime.”

An individual also has “no obligation” to tell the authorities the whereabouts of a fugitive, he said.

In Del Castillo’s case, she apparently did not know the exact location of the meeting with Guzman, which Penn described in a Rolling Stone article as a “jungle” clearing.