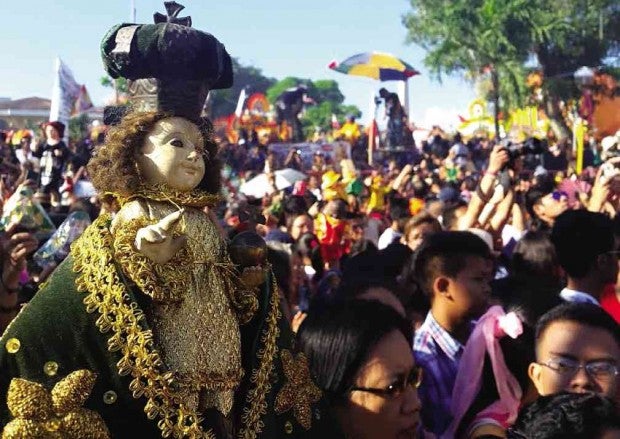 DEVOTEES bear images of the Sto. Niño as they hear Mass in front of St. John the Baptist Cathedral in Kalibo, Aklan, for the town’s Ati-Atihan festival. NESTOR P. BURGOS JR. / Inquirer Visayas

As the crowd repeatedly cried out, “Viva!” the sound of hundreds of beating drums erupted from Pastrana Park fronting  St. John the Baptist Cathedral.

Ati tribes then poured out from the plaza into the streets followed by revelers, many of them dancing and raising images of the Sto. Niño.

Revelers and tourists braved the heat as they danced on the streets on the culmination of this year’s Kalibo Ati-Atihan, one of the festivals held in honor of the Child Jesus.

Bishop Jose Corazon Tala-oc celebrated Mass along with 25 other priests on an elevated platform in front of the cathedral.

In his 24-minute homily, the prelate called on parents, leaders of the church and government officials to focus on the plight and future of the youth.

“Parents, fathers and mothers, where are your children? Do you know where [they are]? [Be] like Mary and Joseph. They sacrificed to look for their son,” Tala-oc said, citing the biblical story on how Jesus went missing when he was 12 years old in Jerusalem and eventually found by his parents in a temple engaging with religious leaders.

He urged parents to seek their children and ask them why they went astray, even if this meant hearing painful answers and explanations.

“To all of us who are now mature, especially to us leaders of our Church and our country… where are our young ones? Where are they now? Have we looked for them?” he said. “We always say that [the children] are the future. Let us take care of them. Or, maybe, they are exploited by our [well-thought of] plans?”

He also called on the young to understand, listen and obey their parents.

“To obey parents is a blessing. They can pardon our sins even before God [does],” Tala-oc said.

The festival ended with a religious procession and street-dancing led by Tala-oc and local leaders along the main streets of Kalibo.

The procession, which started at 2 p.m., was expected to last for at least eight hours and would end at the grounds of the cathedral.  Nestor P. Burgos Jr., Inquirer Visayas