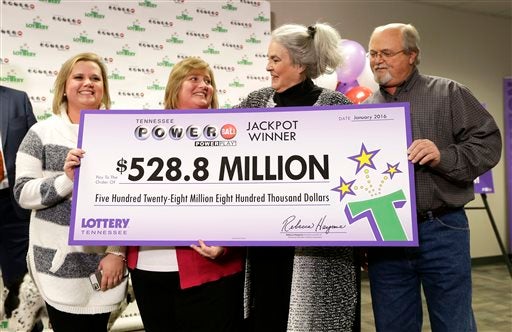 Rebecca Hargrove, second from right, president and CEO of the Tennessee Lottery, presents a ceremonial check to John Robinson, right; his wife, Lisa, second from left; and their daughter, Tiffany, left; after the Robinson’s winning Powerball ticket was authenticated at the Tennessee Lottery headquarters Friday, Jan. 15, 2016, in Nashville, Tenn. The ticket was one of three winning tickets in the $1.6 billion jackpot drawing. AP

NEW YORK—Lottery officials confirmed on Friday that a Tennessee couple held one of three winning tickets for a world record $1.6-billion Powerball jackpot and handed them a symbolic check for $528.8 million.

John and Lisa Robinson said they had barely slept since defying the odds to hit the jackpot, but they smiled when a lottery executive handed them a giant check before a phalanx of television cameras.

John works at a maintenance distribution center and Lisa for a dermatologist. Their adult daughter Tiffany stood next to them with their rescue dog Abby.

The Robinsons, from the tiny town of Munford, with barely 5,000 residents, appeared overwhelmed by their incredible luck in the Powerball jackpot draw on Wednesday. The chances of winning were 1 in 292.2 million.

The couple told reporters that they wanted to pay off their daughter’s student loans, but had no plans to move and wanted to continue working. They intend to donate funds to their church and a children’s hospital and to help friends.

Rebecca Hargrove, president of the Tennessee Lottery Corp., said they would have to wait 10 days for their actual winnings, which the commission would pay after retailers send in the proceeds of record ticket sales.

“They’ll get a small check today for a few million,” said Hargrove.

The couple have opted to receive a one-time cash payment of $337 million rather than $528.8 million divided into annual payments over 29 years. There is no state tax on lottery winnings in Tennessee.

“More stress comes with that ticket,” Lisa  told a news conference in Nashville after flying in from New York, where the couple had appeared on national television.

The Robinsons’ daughter Tiffany, who flew with them to New York and back, wanted a horse.

“My first thought was, I’ve always wanted a horse,” she said. “I get a horse now. My dad always said, ‘When I win the lottery.’”

The Robinsons said they had consulted the Internet and followed the advice they found there, hiring an accountant and a lawyer to help them navigate their riches.

Their lawyer, Joe Townsend, asked the media to give them time to rest before deciding on any further media appearances.

“They’re almost 48 hours without any sleep,” he told reporters.

The family’s life changed forever when John bought four Powerball tickets at his wife’s request just a few hours before Wednesday’s live television draw, then headed off to sleep because he was not feeling well.

It was his custom to buy four tickets, one for each member of his immediate family. The couple also have a son.

Only after checking the numbers three times did an astonished Lisa alert her husband.

“I went running down the hallway,  ‘John, John, you’ve got to check these numbers!’” she told NBC’s “Today” show.

He checked the ticket four times, but even then couldn’t quite believe it, so the couple waited for the news to come on in the morning and confirm there had been a winner in Munford, which is northeast of Memphis.

Lisa said there had been no time to plan how to spend the money but she does not intend to quit her job.

“I’ll be there Monday,” she promised.

“That’s what we’ve done all our lives, is work,” John said. “You just can’t sit down and lay down and not do nothing anymore. How long are you doing to last?”

The Robinsons said they only played the lottery when the jackpot got particularly high in hopes of getting “a little piece of the pie.”

John said he did not make enough money to play every week.

“Actually, I was on way home from work, and she had called me and she said, ‘Are you going to stop and get a couple lottery tickets?’” John told NBC.

“I really didn’t feel like stopping that night, but I was like, ‘Yeah, I’ll stop’… I wasn’t feeling good, and I handed the tickets to her and said, ‘I’m going to go lay down,’” he said.

The identities of the two other winning ticket holders have not been revealed. A ticket in California was bought at a Los Angeles convenience store and one in Florida from a Melbourne Beach supermarket.

The previous US jackpot record of $656 million, on March 30, 2012, was scooped by three winners from North Carolina, Puerto Rico and Texas. Reports from AFP and AP