Cebu port eyed for US ships seen too small 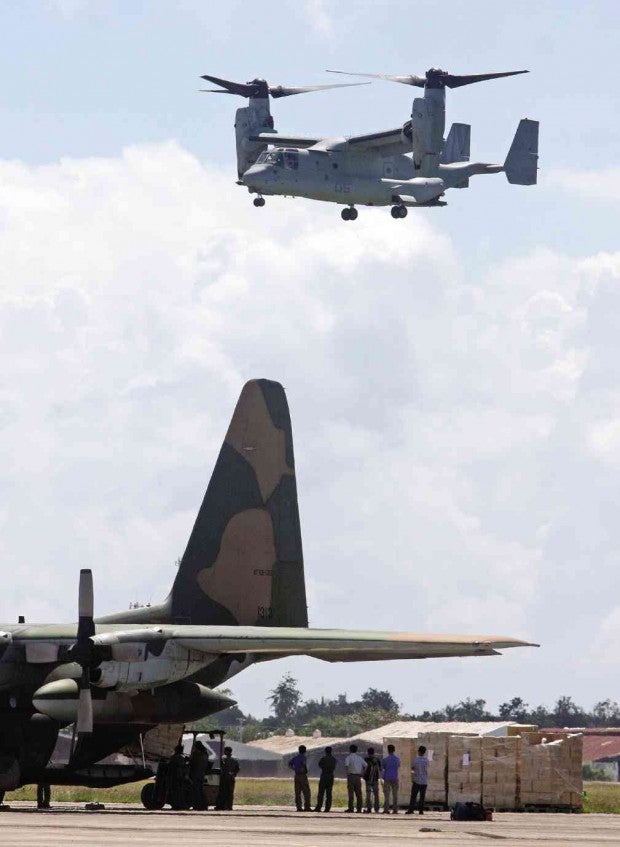 US aircraft used the former Mactan Air Base to bring aid to victims of Supertyphoon “Yolanda” in Eastern Visayas. The same base may be used for military purposes by the US armed forces. TONEE DESPOJO/CEBU DAILY NEWS

CEBU CITY—The plan to use two Philippine military bases in Cebu as military hubs of United States military forces may have to be postponed as far as the city’s naval base is concerned.

The docking port at the Naval Base Rafael Ramos (NBRR) in Barangay Canjulao, Lapu-Lapu City, is too small for vessels the size of those operated by the US Navy.

The port could not even accommodate BRP Gregorio del Pilar, a frigate, which had to be docked at the Cebu International Port when it visited Cebu last year.

While the depth of the water in the base is apt for big vessels, the port is too small, according to officials.

The Mactan Benito Ebuen Air Base (MBEAB), also in Lapu-Lapu City, can host US Air Force planes, however.

A source at the Philippine Air Force’s 2nd Division told the Inquirer that the current runway and hangar of the MBEAB can accommodate aircraft as big as the US Boeing C-17.

It can also accommodate military C-130 planes as well.

The MBEAB and the NBRR were among the eight bases offered by the Philippines to the United States as temporary bases for equipment storage and supplies under the Enhanced Defense Cooperation Agreement that was recently declared as constitutional by the Supreme Court.

But there might be a need to develop the NBRR to accommodate the US Navy ships.

The source said the current docking port could take only vessels as big as a landing craft, which has a capacity to carry 2,280 tons of cargo.

The Navy officer said there was a plan to develop the NBRR since the Philippine Navy wanted to transfer its fleet to the Navy base in Lapu-Lapu due to its strategic location.

He added that there were plans to reclaim some areas there to accommodate new offices. But these are still subject for approval, he said.

But the NBRR is also too small for military exercises, said the source.

“It can be used as a holding area but if there are military exercises, we have to look for other places in Cebu to do that,” said the source.

It’s a different story when it comes to the MBEAB.

The PAF source said there is an ongoing expansion of the air base.

According to the PAF website, the MBEAB, which was known before as Mactan Air Base, served as an emergency landing strip for the US bombers in 1956.

It was used as an outpost until the Vietnam War when it served as an air transit point for American troops and supplies bound for the war zone.

After the war, it was transferred to the PAF.

The MBEAB has a 10,000-foot long runway which is now being shared with the Mactan Cebu International Airport.

Militant groups planned to hold protest actions should the US be allowed to use the two Cebu bases.

Jaime Paglinawan, chair of Bagong Alyansang Makabayan in Central Visayas, said the plan of the Philippine government may do more harm than good to Cebuanos.

Paglinawan said US military presence could open the doors to more abuses on women and transgenders.

He cited the recent case involving US Marine Lance Cpl. Joseph Scott Pemberton, who had been convicted of killing transgender Jeffrey “Jennifer” Laude.

“This should not happen here in Cebu,” Paglinawan said in a phone interview.

Paglinawan warned of massive protest actions against US military operations in Cebu.

He said prostitution became widespread in 1991 when American soldiers were stationed in Cebu due to the Visiting Forces Agreement.